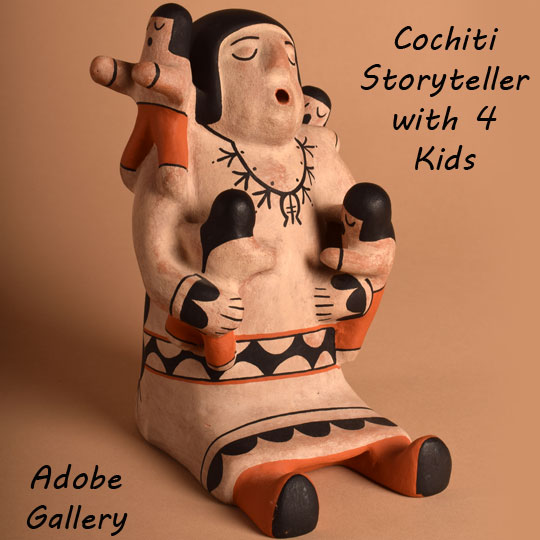 This Cochiti Pueblo pottery storyteller figurine by Ivan Lewis is a seated female and she is holding two children in her arms with another one hanging on to her back and one sitting on her shoulder.  All four children are boys.  The clothing of the adult is beautifully rendered on the back.  The absolute preciseness of the painted designs is an indication of a steady hand.  The painted curves on her sleeves, on the belt she wears, and on the hemline are flawless, an indication that this was made when Ivan was younger.  The children do not appear to have been molded and added to the adult, rather they appear to be an integral part of the clay body.  The black pigment is wonderfully strong in color.  The figurine is signed as Ivan Lewis Cochiti Pue N. Mex.

Ivan Lewis was the son of famous Acoma Pueblo potter Lucy M. Lewis. He never made pottery while living at Acoma, only started making it after marrying Rita Banada and moving to her Pueblo of Cochiti.

Ivan (1919-2001) and Rita (1920-1991) Lewis were married in 1944 while he was serving in the military.  Upon returning from military service, he moved to Cochiti Pueblo where he spent the remainder of his life.  Ivan began making pottery in the Cochiti style around 1977, following twelve years of working on the Cochiti Dam.  His specialty was pottery figurines, especially cowboys.  It is a treat to have one of his storyteller figurines.

Provenance: this Cochiti Pueblo Seated Female Pottery Storyteller with 4 Children by Ivan Lewis is from a resident of Seattle, Washington