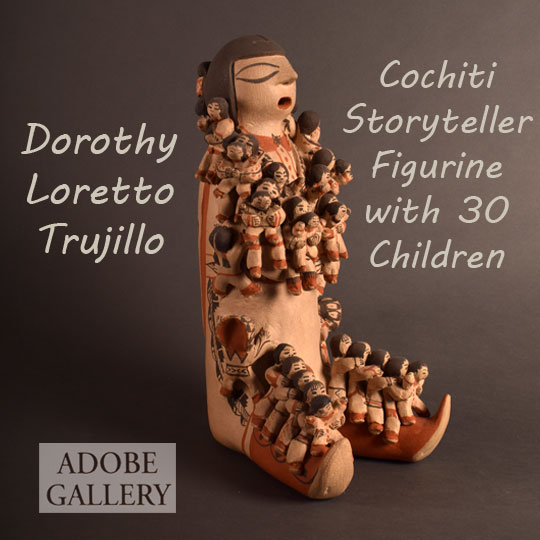 In true Cochiti Pueblo tradition, artist Dorothy Trujillo made her pottery figurine with eyes closed and mouth open. The closed eyes represent thought and the open mouth represents storytelling. The adult figurine is beautifully painted with a design on the back and wearing a squash blossom necklace.  There are 30 children spread over the adult figure. Two of the children are wearing Plains Indian headdresses. The figurine is signed with the artist’s name.

Dorothy Loretto Trujillo (1932 - 1999) was one of the early potters to make storyteller figurines.  She was from a family of outstanding potters. Her sisters, Mary E. Toya (b.1934), Marie Edna Coriz (b.1946), Alma Loretto Concha Maestas (b.1941), Fannie Loretto Wall (b.1953), and Lenora Lupe Lucero (b.1943), are famous potters as well.  Interestingly, her sisters also married out of their native pueblo and moved to the pueblo of their spouses.

Condition: this Cochiti Pueblo Very Large Pottery Storyteller Figurine with 30 Children by Dorothy Trujillo is in very good condition after repairs to several of the children who had broken arms.

Provenance: from the collection of a client from Albuquerque