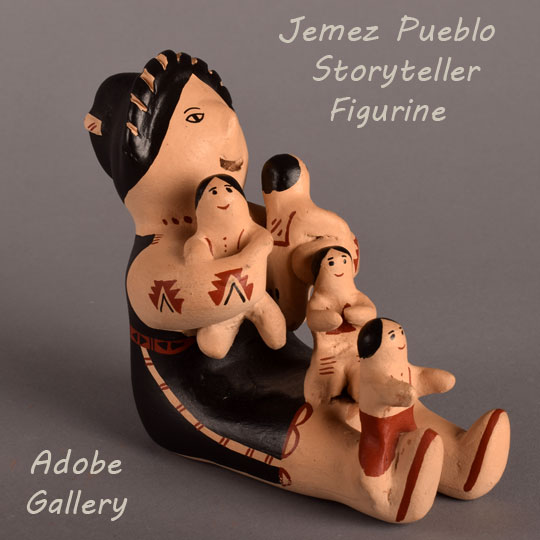 This charming Jemez Pueblo female storyteller pottery figurine by Cypriana Toledo has four children in her arms and on her lap. She has her hair tied in the traditional chonga on the back and has her eyes and mouth open. Her dress is traditional pueblo style, and the sleeves of her blouse are decorated. The four children have minor clothing designs. The storyteller is signed with the name of the potter and pueblo, but not dated. It was purchased in the 1980s by the current owner and it is assumed that it was new at that time.

Contemporary pottery artist Cypriana Toledo is known for her traditional style pottery storyteller figurines.  Sometimes, she breaks away from tradition and creates pottery using red clay and bright acrylics.   She is often seen at the annual Santa Fe's Indian Market alongside her contemporaries.

Provenance: this Contemporary Jemez Pueblo Pottery Storyteller Figurine by Cypriana Toledo is from the collection of the gentleman who was the original owner.

Recommended Reading: The Pueblo Storyteller by Barbara A. Babcock