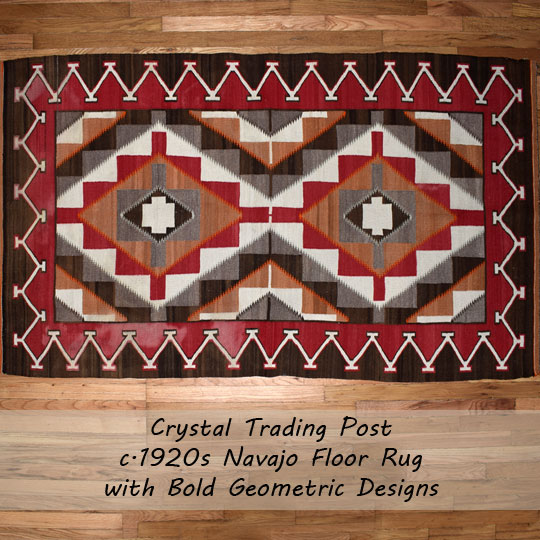 This circa 1920s floor rug by an unidentified Diné weaver of the Navajo Nation is spectacular with its bold geometric designs filled with bright colors.  It is geometry at its best—triangles, rectangles, diamonds, and crosses.  The textile is bordered with brown and red triangles face-to-face that are separated by white triangles in chain formation.  Within the border the design consists of two identical squares, each containing a white cross at its center. From this cross, expanding outward are a brown diamond outlined in a zig zag white line, floating on a gray square with two horizontal bar extensions, this then floating on an orange diamond, which is then floated on a red platform with stepped edges, and, finally this overlaid design rests on a white diamond.

Surrounding this multiple overlay design are light brown, dark brown, orange, and white triangles which provide borders for the design.  This design we have described is repeated twice.

The bright red color mixed with pumpkin orange, shades of brown and gray, and a minimum of white combine to form a magnificent bold statement.

This textile has some condition problems, primarily in the red yarn.  It appears that the red dye bleached out in areas of the rug.  Although noticeable, if examined, this defect is not apparent in casual viewing because the design and colors are so strong. We do not normally accept rugs with damage, but this one is so appealing that we made an exception.  There is some minor fraying at the corners of one end of the rug.