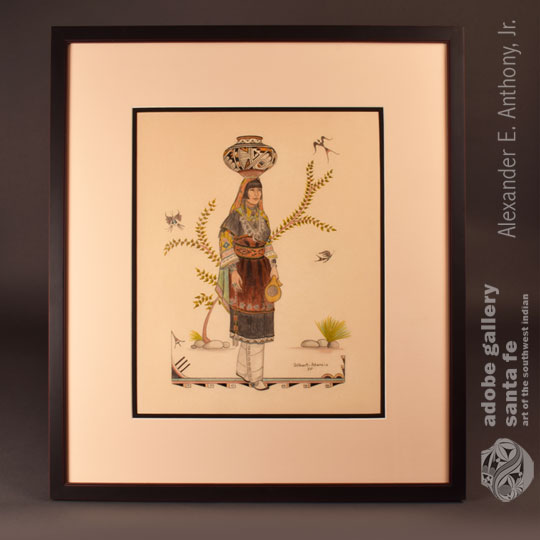 This rare piece from San Ildefonso Pueblo artist Gilbert Atencio will appeal to those who appreciate a unique twist on classic pueblo imagery.  Most notably atypical is the medium: colored pencil on paper. Prior to this piece, we have not seen colored pencil drawings from the Pueblo artists whose works we handle.  It makes sense that the first colored pencil drawing that made its way to the gallery would be an Atencio—he was a medical illustrator for Los Alamos National Labs, and so he was technically accomplished and comfortable working with a wide variety of tools.  Those technical skills are apparent in every inch of this colorful drawing.

The image, as mentioned above, is a classic pueblo scene.  It features a woman, dressed in traditional clothing, carrying a pot on her head.  The viewer sees her neither head-on nor in profile, but diagonally—a challenging perspective which Atencio favored in his paintings and always handled well.  She steps over a colorful framing design. Tree branches reach out from behind her; butterflies and birds decorate the background. The artist’s chosen medium works well; it allows for a softer, more textured feel than watercolors do.  Her clothing and jewelry are even more detailed than usual—again, an advantage provided by the atypical medium—and her face displays a quiet, appealing smile. The pot balanced atop her head is beautiful, too. Atencio must have had a special appreciation for the pottery of his people, as it is often featured in his works.

Atencio will certainly be recognized as one of the finest pueblo painters of the second half of the 20th century—not only from San Ildefonso Pueblo, but among all pueblo painters.  His attention to detail was unequalled. A professional medical illustrator at Los Alamos National Labs, Atencio carried his precise drawing and painting skills over to his fine art paintings.  His crisply drawn and clearly colored renderings of ceremonial and home life have, since around 1947, been favorites in many shows. Much of Atencio’s inspiration for paintings came from stories his aunts told him about their lives. His style varied from the traditional flat style done early in his career, to more realistic paintings done later in his career.  Atencio passed away in 1995, and remains highly regarded by scholars and collectors.

The drawing is signed “Gilbert Atencio” and dated “75” in lower right.  It is presented underneath a wide mat, which matches the color of the paper, with a thin black border that matches the frame.

Condition: this Original Drawing of San Ildefonso Pueblo Woman Carrying a Pot by Gilbert Atencio has recently been professionally cleaned, and now is in excellent condition