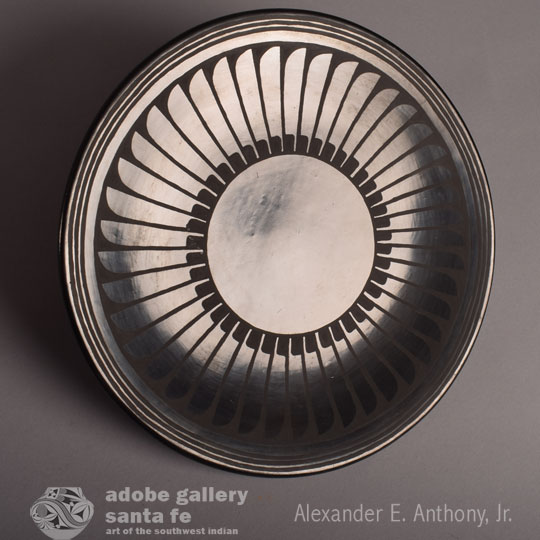 This black-on-black plate is signed with the earlier signature Marie + Santana, indicating that it was made between 1943 and 1956.  The matte black design provides the outline for eagle feathers, a favorite design of Julian's and one continued by Santana and Popovi Da.

Maria and Julian Martinez had four sons: Adam, John, Popovi Da, and Philip.  Adam’s wife was Santana and it was she who worked with Maria following the death of Julian in 1943.  There are two periods of pottery that were collaborated by Maria and Santana.  The earlier ones were signed Marie + Santana and that period lasted from Julian’s death in 1943 until 1956, at which time Popovi Da replaced Santana and helped his mom.  Maria did not immediately stop working with Santana when she began working with Popovi but did continue on and off for a few more years.  Those later pieces are signed Maria + Santana.

Condition: very good condition.  Well taken care of over the last three-quarters of a century.

Provenance: from a family collection from Missouri