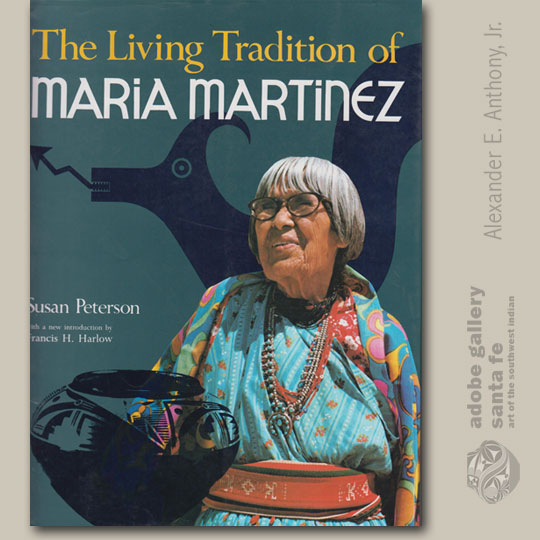 The Living Tradition of Maria Martinez

Illustrated in color and black and white, 300 pages, excellent condition

This book is the culmination of the author's nearly thirty-year association with Maria and her family. It is the only major book about Maria Martinez since Alice Marriott's classic work in 1948, and its 195 color and 139 black-and-white plates are the first photographic representation of Maria's life and work and of the work of her family of potters.

Maria Martinez is one of the great figures in the pottery world of this century; like Bernard Leach and Shoji Hamada, she has become a legend in her lifetime. The magnificent burnished black pottery perfected by Maria and her husband Julian, in the second decade of the 20th- century, is prized by collectors and museums throughout North America and Europe. Maria, a Tewa Indian of New Mexico's San Ildefonso Pueblo, was born in the 1880s and was an active potter until the 1970s. Three generations of Maria's family continued her black-on-black pottery tradition, the younger potters adding techniques and trying new ideas while maintaining their Indian heritage.

As a young woman, Maria was known as the most skilled potter of her pueblo. For this reason, an archaeologist asked her to recreate the original shapes of ancient pottery that he had excavated. This request led her and Julian to produce the first black-on-black pieces in 1918, after several years of experimentation; Julian, an accomplished artist, did the decoration. As their black ware became more and more popular, Maria and Julian increasingly turned away from the polychrome ware of their pueblo and more toward the new burnished black style. After Julian's death in 1943, Maria worked with her daughter-in-law Santana and her son Popovi Da, who continued his parents' experimentation to produce striking innovations.

Maria and her family come alive in the pages of this book. The principal inheritors of the family tradition are Adam, Maria's son, and his wife, Santana. Their granddaughter Barbara represents the youngest generation of Martinez family potters and makes original pieces of great vigor. Other family members have made unique contributions to the San Ildefonso pottery craft.