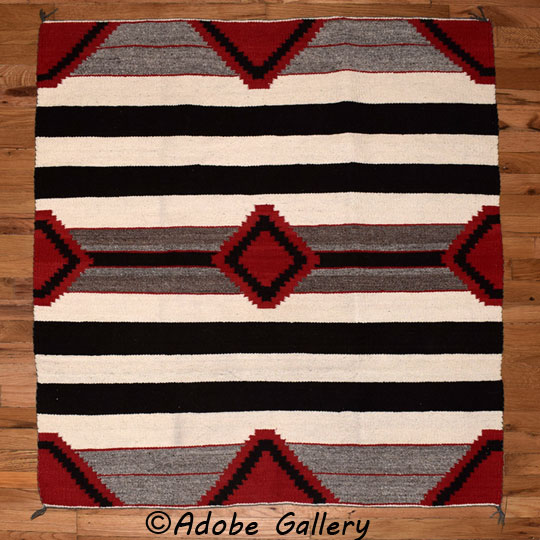 This Navajo textile was woven by Diné of the Navajo Nation artist Eva Gorline in the mid-1950s according to the current owner. It is in the style of a Third Phase Chief blanket of the nineteenth century. This style is sometimes referred to as a nine-spot pattern, so designated because of the nine red triangles in the design.

The classic First Phase Navajo blankets often consisted of black and white bands with a wide band of indigo in the center. Second Phase blankets added bands of red yarn, typically at each end and in the center of the textile. Third Phase blankets appeared with the red triangles, as in this textile.

This weaving has gray yarn at the ends, and at the center, substituting for the red of the 19th century textiles. The black rows replace the indigo ones of the older blankets.

Warp and Weft:  In weaving, the weft (sometimes woof) is the term for the thread or yarn which is drawn through, inserted over-and-under, the lengthwise warp yarns that are held in tension on a frame or loom to create cloth. Warp is the lengthwise or longitudinal thread in a roll, while weft is the transverse thread. A single thread of the weft, crossing the warp, is called a pick. Terms do vary (for instance, in North America, the weft is sometimes referred to as the fill or the filling yarn).  Each individual warp thread in a fabric is called a warp end or end.  The weft is a thread or yarn usually made of spun fibre. The original fibres used were wool, flax or cotton. Today, man-made fibres are often used in weaving. Because the weft does not have to be stretched on a loom in the way that the warp is, it can generally be less strong.  The weft is threaded through the warp using a "shuttle", air jets or "rapier grippers." Hand looms were the original weaver's tool, with the shuttle being threaded through alternately raised warps by hand.  -Wikipedia

Condition: This textile, approximately 65 years old, is in excellent condition because it has only been displayed by hanging, never used on the floor. The previous owner stitched a strip of Velcro on the back to facilitate hanging the rug. The Velcro is still attached. It could be removed if desired.

Provenance: this Eva Gorline Navajo Third Phase Chief Style Textile is from an estate in California

Recommended Reading: The Navajo Weaving Tradition 1650 to the Present by Kaufman and Selser