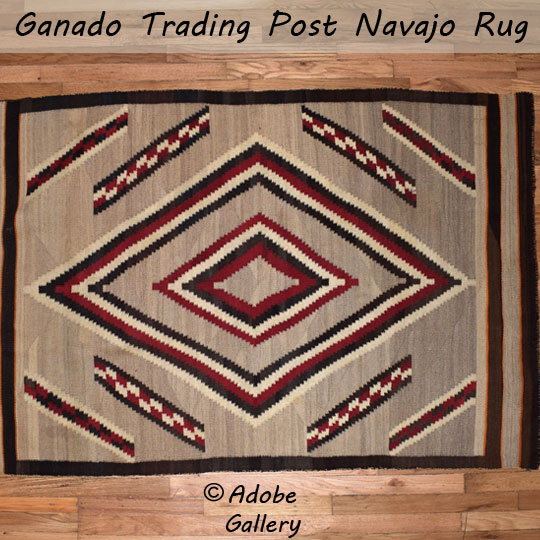 This Navajo rug has all the characteristics of one from the 1930s. The light background was woven from natural sheep wool carded from black and white wool, resulting in wonderful variations in shades throughout. Typically, a weaver spins and cards enough wool for a few day's weaving, then does more a few days later, resulting in slight variations in color. Such variations add tremendously to the appeal of a rug because there are variations throughout the textile. Additionally, a few visible "lazy lines" confirm the handmade nature of the rug.

The central design is a series of diamonds with serrated edges, executed in yarn colors of white, red, and brown. The serrated edges required an immense amount of extra time over that of straight edges. Only an accomplished weaver could and would execute so many of these serrations.

The four corners of the design field contain a pair of bars with serrated edges and executed with white, red, and brown yarns. A dark brown border encircles the textile. The edges of the textile contain two additional borders, each outlined with thin orange wool. A distinctive feature of the rug's borders at Ganado during this period is the difference between the sides and the edges. They can be completely different as well illustrated in this textile. Another feature at Ganado during this period is the serrated edges of designs.

Condition: the rug is in good condition for one of its age

Provenance: this Ganado Trading Post Navajo Rug is from the collection of a gentleman from California

Reference: One Hundred Years of Navajo Rugs by Marian E. Rodee, ("Chapter 7. Lorenzo Hubbell of Ganado and His Trading Empire")