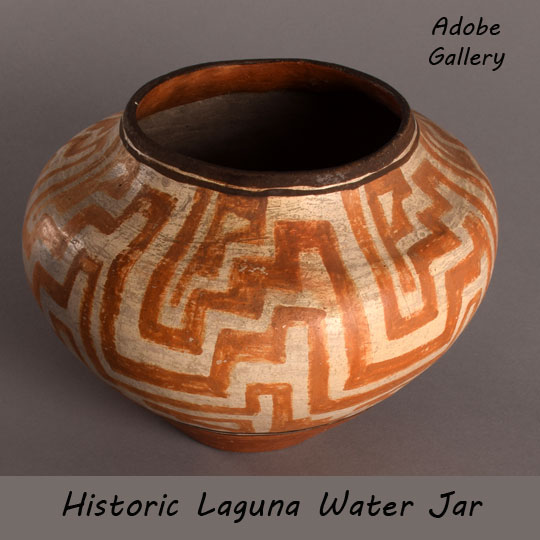 This exquisite small jar from Laguna Pueblo features a strong linear design executed exclusively in orange slip over a white background.  The only variation from those colors is the brown rim and upper and lower brown framing lines.  The design is a wonderful and playful one of following a line up and down and over.  The potter surely had a marvelous time painting such an interesting mixture of directions.

This jar dates to circa 1900 and is typical of those made at Laguna for the market.  The transcontinental railroad arrived in New Mexico in 1879, and there was a rail stop at Laguna Pueblo, exerting positive and negative effects on pottery at the time.  Many Laguna residents went to work for the railroad, some moving to towns such as Winslow, Arizona,  and towns as far away as California.  This had the effect of pottery production almost dying out at Laguna.  The positive aspect of the arrival of the trains and tourists was the demand for souvenirs by the travelers, but the negative effect was that quality deteriorated during mass production, and smaller kitschy items were made to sell.

Fortunately, potters from Acoma Pueblo traveled to Laguna to sell their wares to the train travelers.  The fine wares from Acoma were an influence on the remaining Laguna potters to improve their techniques.  Additionally, traders established themselves near Laguna and ordered pottery in bulk, greatly influencing potters to increase production in a positive way as the traders demanded quality wares.

This jar certainly is one which was made by a talented potter with artistic independence.  Her choice of vessel shape, with a high shoulder and short neck, was perfect for the meandering design she playfully added.

Condition: very good condition.  There was a large amount of candle wax on the interior.  We removed it, leaving only a faint residual.

Provenance: this Exquisite Laguna Pueblo Historic Small Pottery Jar is from a gentleman from Virginia