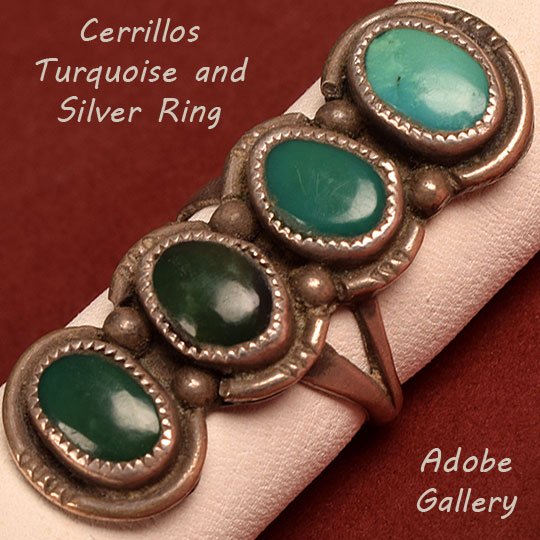 The turquoise mine commonly known as Cerrillos was called "Chalchihuital" by the Pueblo people of New Mexico. Turquoise from this area has been extracted since prehistoric times and has been found as far south as central Mexico. It was the first turquoise used by Southwestern silversmiths in the late 19th and early 20th Centuries. The stone has been coveted and valued for centuries for its amazing array of different hues, ranging from a light sea blue green to a dark green.

This early 20th Century ring contains four stones, ranging in color from a light aqua to a deep emerald green. An unknown Diné artist took the four stones and securely set them in serrated bezels and framed the settings on a platform with silver drops and hand-filed lines. The four stones rest on a slender split shank. As is characteristic of early Diné silverwork, the stones are the focal point of the piece.

Provenance: From a Colorado resident

Recommended Reading: The Navajo and Pueblo Silversmiths by John Adair