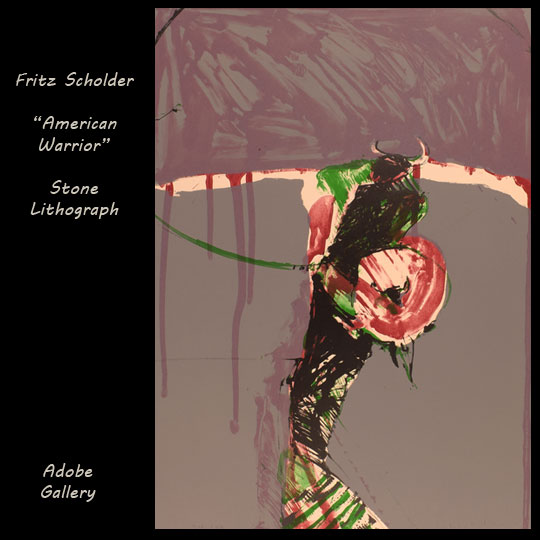 “American Warrior” is a color lithograph by Fritz Scholder, a famous and influential Luiseño painter. The piece was created in 1981 at Tamarind Institute in Albuquerque, New Mexico. This dates it to about a decade after Scholder began his exploration of lithography, also at Tamarind, which had been established in 1970 as a division of the University of New Mexico. Tamarind is still operational today, training future master printers and hosting artists from around the world.

Scholder’s experience and confidence are evident in this image, which makes use of multiple colors to form a strong, mysterious figure. A gray tone forms a background, with a horizontal break allowing the white paper to show through. Above the break, gray combines with red to form a chaotic smear of purple, which occasionally ventures down into the gray block below. The warrior appears in black, bright green, and blood red, emerging dramatically from his more muted surroundings. Sharp horns, a shield, and a broad-shouldered form signify strength; the rest is left to the viewer’s imagination.