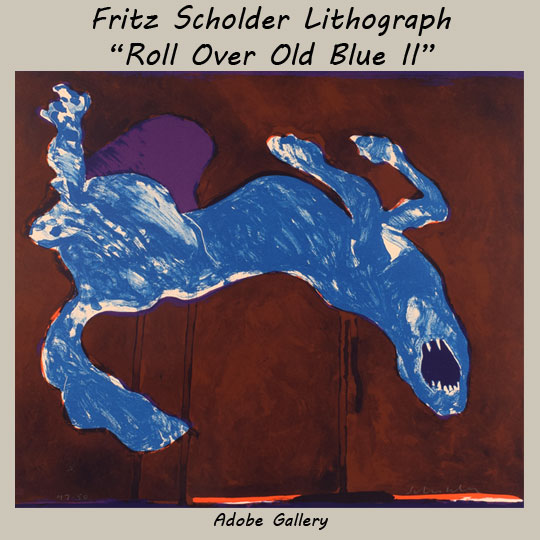 “Roll Over Old Blue II” is a stone lithograph by Luiseño painter Fritz Scholder.  The “II” in the title identifies the piece as the second of three states, each one of which has a different color scheme. For this exceptional second state, Scholder and his collaborators selected a wonderful combination of blue, purple, and orange over a warm brown background. Of the three states, this particular piece presents the most action and energy.

Scholder’s “Old Blue” is depicted in a lively state, rolling over and opening his mouth wide. He bares his teeth, but it feels more like an invitation to interact playfully than it does a threat. It’s interesting to take note of which features Scholder chose to depict in some kind of detail within his abstracted figures. While Old Blue’s body exists as a dreamy blue form, his teeth emerge somewhat sharply defined, which keeps the viewer in touch with the physical world as they explore the beautiful clouds of color that occupy most of the image.

“Roll Over Old Blue II” was created in 1978 at Southwest Graphics in Scottsdale, Arizona. It is signed Scholder in lower right, numbered “47/50” in lower left, and marked with the shop and printer’s chop marks. It is unframed.