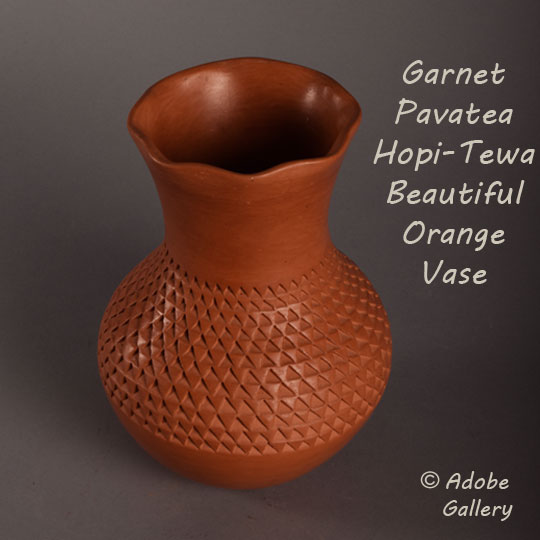 This elegant stone-polished red vase by Garnet Pavatea has a beautiful, smooth, highly burnished finish.  It is completely devoid of painted designs but has a band of indentations around the body.  There are eleven rows of these and the triangles are smaller at the top and bottom rows and expand as they reach mid-body.  Garnet extended the polishing down into the interior of the vessel, a step that was not necessary but that demonstrates her attention to detail.  She also polished the underside and that is where she put her name.

Garnet Pavatea’s Hopi name translates in English to Flower Girl.  She was a Hopi-Tewa from the Tewa Village on First Mesa.  Her dad, Dewakuku, was Hopi and her mother was Tewa.  Following tradition, Garnet was of her mother's clan.

Hopi artisans owe much to Mary-Russell Ferrell Colton, co-founder with her husband of the Museum of Northern Arizona in Flagstaff.  She was instrumental in creating the Hopi Craftsman Exhibition in the early 1930s with the intent of fostering production of quality work.  She was concerned that traders were content to accept and sell mediocre work from Hopi craftsmen and were not interested in educating the public on quality crafts.  She organized the craft exhibit for the July 4th weekend every year and it has served her intent to greatly increase interest in quality Hopi crafts.

Garnet Pavatea (1915-1981) Flower Girl was a long-time entrant in the Hopi craft exhibit and won many awards by doing so.  She also seemed to be a favorite of the Museum of Northern Arizona.  She was often a demonstrator at the Craftsman Exhibition.  For a number of years, Adobe Gallery had a standing order from the Museum of Northern Arizona for any Garnet Pavatea pottery available.

This extraordinary vase by Garnet clearly illustrates her attention to detail and her patience in producing a work of art of immense difficulty.  One can only imagine how long it took to create such a difficult design.

Provenance: this Garnet Pavatea Hopi-Tewa Beautiful Orange Vase with Design is from a client in Colorado

The Year of the HOPI [SOLD]
by Tyrone Stewart, et al.