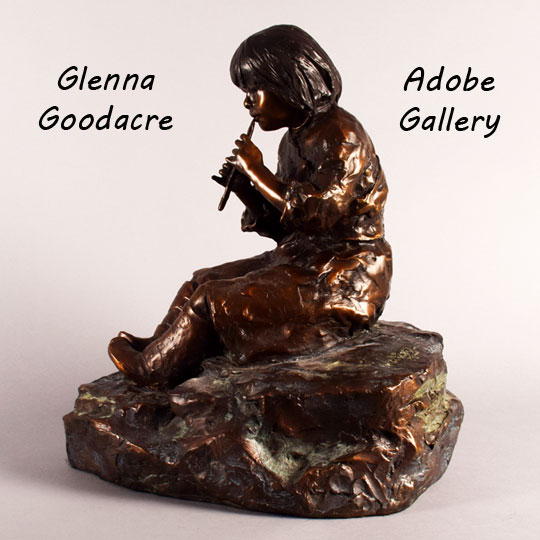 “Sacred Song” is a bronze sculpture by Glenna Goodacre, an American artist who began her career as a painter but ultimately achieved well-deserved fame and success for her work in sculpture.  With this piece, she focused her attention on a young Pueblo Indian girl.  The piece was completed in 2006, long after Goodacre had mastered the art of depicting human figures in sculpture.  As per usual, her work with this figure is sensitive and beautiful.

Because of her age, we might describe Goodacre’s subject as an aspiring flautist.  A closer look, however, reveals a focused expression and confident movement.  The young musician sits atop a large rock formation, leaning forward ever so slightly as she interacts with her instrument.  Her face, hair, and hands received careful treatment and smooth surfaces, and her clothing was presented in a beautifully textured, somewhat abstract manner.  Goodacre provided just enough detail to identify the garments—traditional pueblo attire—without sacrificing the pleasantly rippled textures and shallow waves of bronze that typically define her subject’s bodies.  Goodacre’s work with “Sacred Song” presents a perfect balance of realism and personal expression.

Glenna Maxey Goodacre (1939-2020) was an American sculptor who was born in Lubbock, Texas, and resided in Santa Fe, New Mexico.  Goodacre studied at Colorado College and New York’s Art Students League, beginning as a painter before moving towards three-dimensional media.  She is best known for having designed the Vietnam Women’s Memorial in Washington D.C. and the obverse (or “heads” side) of the U.S. Sacagawea Silver Dollar.  In 2003, she completed Philadelphia’s Irish Memorial, a massive public sculpture made to commemorate the many lives lost in Ireland during the middle of the nineteenth century.  Her works are included in many notable public, private, and municipal collections around the country.

Goodacre’s works have received many prestigious awards and honors, and the artist herself received many accolades from both her original and adoptive states.  She was inducted into the West Texas Hall of Fame and named 2008’s “Notable New Mexican” by the Albuquerque Art and History Museum.  She received honorary doctorates from her alma mater and Texas Tech University.  Unfortunately, Goodacre suffered a major head injury in 2007. She recovered well and eventually returned to work, though not without complications.  Goodacre officially retired from sculpting in 2016. She is considered by many to be one of the best and most important sculptors of her era. She died in 2020.

Provenance: this Glenna Goodacre "Sacred Song" Bronze Sculpture is from the estate of a family from southern New Mexico