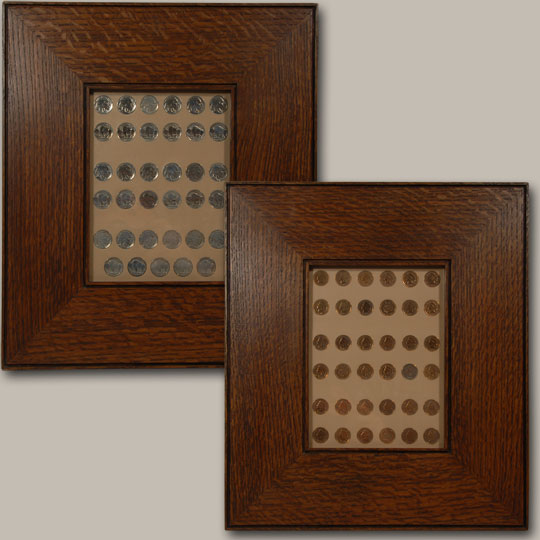 The Indian Head cent, also known as an Indian Head penny, was a one-cent coin ($0.01) produced by the United States Bureau of the Mint from 1859 to 1909. It was designed by James Barton Longacre, the Chief Engraver at the Philadelphia Mint.

From 1793 to 1857, the cent was a copper coin about the size of a half dollar. As rising copper prices made it impractical to keep striking them, in 1857 the Mint reduced the size of the cent, issuing a new design, the Flying Eagle cent. The new pieces were identical in diameter to modern cents, though somewhat thicker and made of copper-nickel. The design caused production difficulties, and the Mint soon looked to replace the coin. Mint Director James Ross Snowden selected the Indian Head design, and chose a laurel wreath for the reverse that was replaced in 1860 by an oak wreath with a shield. Cents were hoarded during the economic chaos of the American Civil War, when the metal nickel was in short supply. As Mint officials saw that privately issued bronze tokens were circulating, they induced Congress to pass the Coinage Act of 1864, authorizing a slimmer cent of bronze alloy.

In the postwar period, the cent became very popular and was struck in large numbers in most years. An exception was 1877, when a poor economy and little demand for cents created one of the rarest dates in the series. With the advent of coin-operated machines in the late 19th and early 20th centuries, even more cents were produced, reaching 100 million for the first time in 1907. In 1909, the Indian Head cent was replaced by the Lincoln cent, designed by Victor D. Brenner.

This handmade quarter-sawn oak frame was made to display this group of 36 Indian Head pennies.  They date from 1900 to 1909.

The Buffalo nickel or Indian Head nickel was a copper-nickel five-cent piece struck by the United States Mint from 1913 to 1938. It was designed by sculptor James Earle Fraser.

In 1911, Taft administration officials decided to replace Charles E. Barber's Liberty Head design for the nickel, and commissioned Fraser to do the work. They were impressed by Fraser's designs showing a Native American and an American bison. The designs were approved in 1912, but were delayed several months because of objections from the Hobbs Manufacturing Company, which made mechanisms to detect slugs in nickel-operated machines. The company was not satisfied by changes made in the coin by Fraser, and in February 1913, Treasury Secretary Franklin MacVeagh decided to issue the coins despite the objections.

Despite attempts by the Mint to adjust the design, the coins proved to strike indistinctly, and to be subject to wear—the dates were easily worn away in circulation. In 1938, after the expiration of the minimum 25-year period during which the design could not be replaced without congressional authorization, it was replaced by the Jefferson nickel, designed by Felix Schlag.

This handmade quarter-sawn oak frame was made to display this group of 35 Indian Head nickels.  They date from 1921 to 1938.

CRAFTSMAN HOMES: Architecture and Furnishings of the American Arts and Crafts Movement
by Gustav Stickley