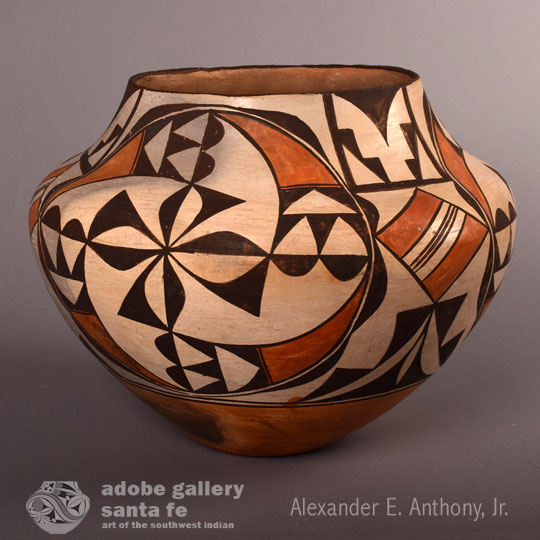 This is a beautiful historic example of how Acoma Pueblo potters traditionally fill the area of a vessel with a variety of designs. Sometimes, the design goes from base to rim without divisions into sections. At other times, the jar is divided into horizontal bands and each band features a different design. The potter chose to forego divisions and devote the full surface to an enlarged design concept. The jar was constructed of traditional Acoma clay with ground up potsherds as temper. The walls are thin and the jar rings like fine crystal.

The primary design is a large circle with a four-part rotating design in dark brown pigment at the centerpiece, surrounded by four rotating cloud designs in polychrome pigments.  This circle was repeated on the opposite side.

The jar is typical of the 1930s Acoma style.  It has a concave underbody and an orange slipped lower section.  The rim is brown, and the interior is white and left in a matte finish.  There is no evidence of pueblo use so it is likely that it was made to be sold.

Condition: very good condition with minor abrasions to some areas of the brown pigment.

Provenance: this Historic Acoma Pueblo Polychrome Dynamic Design Pottery Jar is from a gentleman from Albuquerque