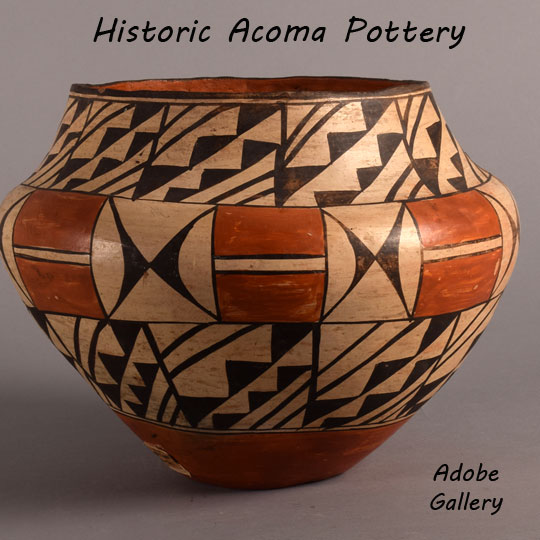 There has always been some question as to when potters started signing their name on pottery.  For decades, there was nothing to indicate potter or pueblo on earlier pieces. The earliest forms of “signature” are actually the designs used on pottery—families had favorite designs that became known as the signature of that family.  One could look at a design and feel confident that a potter of a certain family made that item. Later, potters at Acoma started adding some form of “Acoma, New Mexico” to their work, then “Acoma Sky City,” then eventually a potter’s name.

Emma Lewis Mitchell of Acoma told Rick Dillingham that proper signatures began to appear around 1950.  Other potters have mentioned earlier or later dates (Dillingham, 1992). It seems reasonable to assume that tourist travels following the end of World War II would be a logical time to expect the appearance of signatures.

This Acoma jar has a paper label attached stating “From the Acoma Pueblo 1920s-1930s.”  That period may be a little early for this jar, as it does have “Acoma, N. Mexico” on the underside, which would probably indicate a date at the end of the historic period, that is circa 1940.

The design is reminiscent of later pieces by members of the Chino family. Three design bands appear on the exterior of this well-formed piece. The upper and lower bands use repeating lightning or kiva step patterns nestled within triangular forms. The central band uses pairs of rectangles in a gorgeous orange tone. This is an excellent example of Acoma pottery from the tail end of the historic period.

Condition: very good condition with light wear from use. One vertical crack extending about an inch down from the rim, visible on exterior but not interior

Provenance: this Historic Acoma Pueblo Polychrome OLLA with Geometric Designs is from the collection of the John R. Elkins family of Aspen