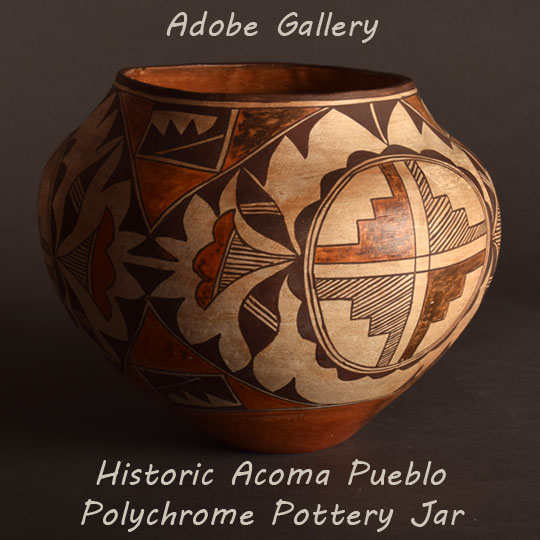 This exceptional historic Acoma Polychrome pottery jar has an interesting history behind it but we will go into that later.  For now, it is important to describe the jar.  It is a polychrome jar believed to date to the 1930s.  The predominant design feature is a circle composed of two thin black fine lines and a ring of black clouds circumnavigating them.  Inside the circle is a four-directional  design of stepped elements, two of which are filled in with orange slip and two filled in with parallel fine lines.  This design is repeated on opposing sides of the jar.

The even more impressive design is the one separating the two circle designs.  This design, also repeated on opposing sides, could easily be viewed also as divided into four elements—a triangle suspended from the top and mirrored by a similar one rising from the lower part of the jar.  Each triangle is filled with orange slip and a square containing mountain peaks.  The other two designs appear to be floral and they are horizontal and facing each other.  The floral appearance is actually clouds and rain.

The jar has Santa - Fe, N.M. 7/12/33 written on the underside in ink, which is the only identifying information.  The same information is written in pencil on the interior of the jar.  It was purchased from Theresa Southard, 99 Moyallen Street, Wilkes-Barre, PA 18702 in 2009 by Edythe L. Gozdiskowski, 36 Scott Street, Swoyersville, PA 18704.  A payment invoice talley is enclosed with the jar.

It is interesting that there are three handwritten letters from Ed Makowski, who was a young man attending his first year at a seminary in Orchard Lake, Michigan.  The letters, dated 1931, were addressed to his sister, whom he only referred to as sister, not by her name.  The letters had no mention of the Acoma jar and it can only be assumed that it was owned by his sister who stored his letters in the jar.

The jar is exquisitely beautiful with precise design applications that obviously were well planned and executed.

Condition: structurally in exceptionally good condition, with some minor paint abrasions. There is a single BB-size pop out in one of the circular designs which happened during the firing process.

Provenance: this Historic Acoma Pueblo Polychrome Pottery Jar with Interesting Provenance is from the estate of Edythe L. Gozdiskowski