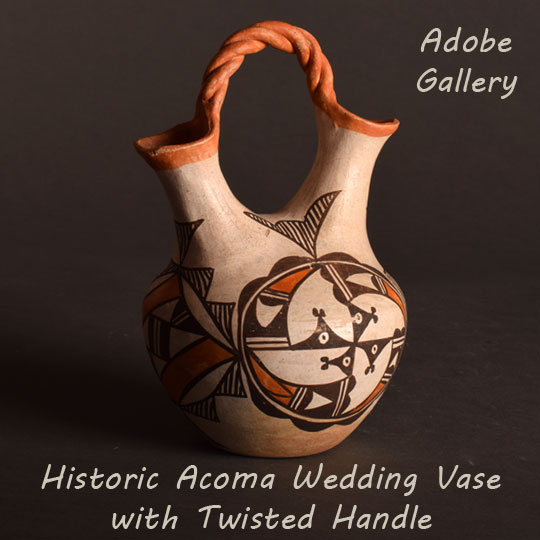 This Acoma Pueblo polychrome wedding vase is traditional in shape, with two spouts connected by a twisted handle.  The design on the body is very dynamic as if swirling around like a cyclone.  The rain clouds are on the outer edge of the circle in motion around four black triangles, each with an eye.  Between the spouts is a single rain cloud.

On one side of the vessel, the four clouds each feature a pair of semicircular black elements.  On the opposite side, the potter forgot to include them on one of the four clouds. She probably got interrupted by someone, had to stop what she was doing, and overlooked finishing those clouds when she resumed work.  I love seeing such things because it illustrates clearly that preparing pottery is a household chore accomplished while other chores are waiting or in progress too.

The designs on the sides of the vessel are rectangular in shape with two orange bars framing black geometric shapes.  Above and below this are rain clouds filled with fine lines.  The bottom of the vessel painted in brown pigment is acoma n. mex in cursive script.

Unlike pieces created and inspired by tourism, the shape of the wedding vase has historical significance. The two spouts represent the bride and groom and the base where the two come together represents the shared life of the couple.

“After a period of courtship, a boy and girl decide to get married, but they cannot do so until certain customs have been observed.  The boy must first call all his relatives together to tell them that he desires to be married to a certain girl.  If the relatives agree, two or three of the oldest men are chosen to call on the parents of the girl.  Here they pray according to Indian custom and then the oldest man will tell the parents of the girl what their mission is.  The parents never give a definite answer at this time—they just say they will let the boy’s family know their decision.... Read more on our Blog

Provenance: this Historic Acoma Pueblo Polychrome Pottery Wedding Vase with Twisted Handle is from the estate of Edythe L. Gozdiskowski