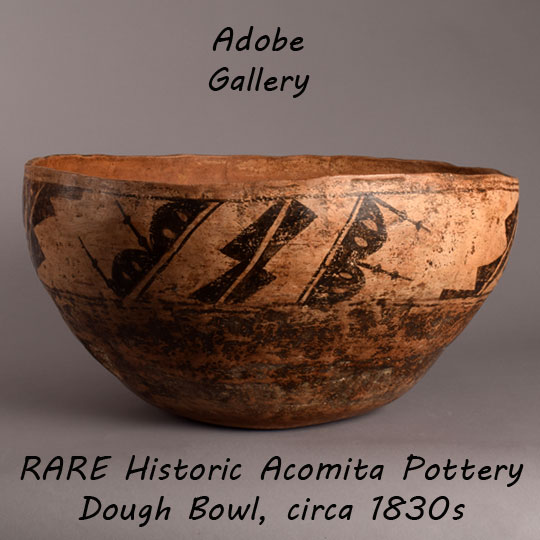 Probably one of the rarest dough bowls in existence would be an early Acomita of a large size dating from circa 1830s to 1840s.  That's exactly what this dough bowl is.  It is a brown-pigment-on-cream-slip dough bowl with a slight incurving and un-sculpted rim, the top of which is painted with brown pigment.

Unique to Acomita dough bowls of this period is that the design panel occupies less than half of the exterior wall surface.  Similar bowls from the 1800 to 1820 periods had designs occupying less than 30% of the surface.  Design areas increased later in time and red pigment was eventually added. Harlow & Lanmon

There are three different design combinations around the circumference, with one design repeated in two locations.  All of the designs have a right-leaning position, meaning they tilt to the right.  The boldest of these designs is composed of a pair of stacked and attached half-moon brown units in mirror reflection across an unpainted cream background.  One set of the half-moon elements has a pair of rectangular eyes that the other set does not.  This inner design is flanked by brown pigment with what may represent animal tracks.  The whole design element is flanked by stacked brown-pigment triangles.

A second design panel is comprised of three right-leaning bars, the outer pair consisting of two connected half-moon, brown pigment elements, each with a pair of circular eyes and each element projecting a pointed antennae with two brown dots.  These two design elements are divided by a bar containing four brown-pigment triangles.  This is the design section that is repeated on the bowl.

The third and final design is a simple array of three right-leaning bars that contain brown-pigment triangles and half-moon attachments.

The whole brown-pigment-on-cream background design is enclosed by an upper and lower pair of thin framing lines.  The area under the design is painted in brown pigment.

This is a very rare example of an early dough bowl from the Pueblo of Acoma.  It is highly unusual to see one on the market today.

Condition: this RARE Historic Acomita Pottery Dough Bowl, circa 1830s is in very good condition with normal wear for its age.

Provenance: from the private collection of a Santa Fe collector

Recommended Reading:  The Pottery of Acoma Pueblo by Harlow and Lanman 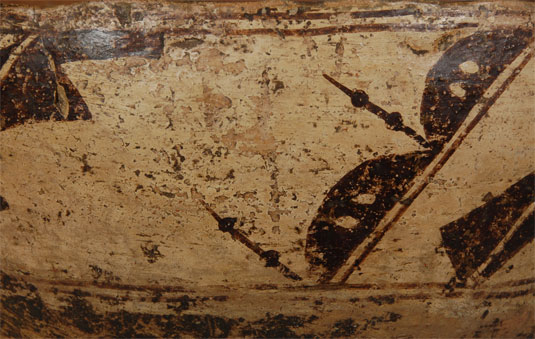