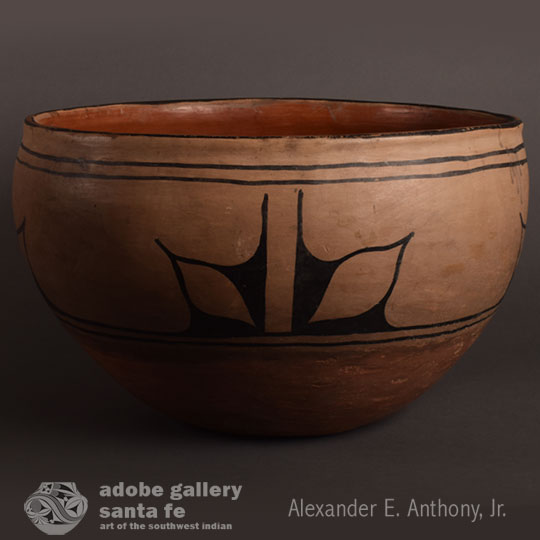 This is an exceptionally fine historic pottery dough bowl from Cochiti Pueblo, decorated in a cream bentonite slip with black guaco design and a red under-body that qualifies it as a Polychrome typology.   It dates to the late nineteenth century and is typically Cochiti in all technical aspects: crystalline-rock temper in the paste, red slip underbody and interior, rag-wiped bentonite slip and black guaco paint. The red slipped interior was stone polished for functional use.

The flat bottom of the bowl swells outward to a rounded body that just slightly curves inward at the rim and then turns outward so very slightly. The design on the body of the bowl is typical Cochiti in execution—a pair of leaf like designs in a back-to-back orientation, resting on the upper of two framing lines.  The design is simple and framed between two pair of framing lines which have ceremonial line breaks. The red underside was not stone polished as was the Cochiti custom of the time. The bowl has a black rim.

Cochiti, at the turn of the last century, made very little pottery for local use, importing it instead from Acoma, Zuni and Zia Pueblos.  What pottery the potters were making was mostly limited to figurative type—effigy vessels and human and animal figurines. Occasionally, potters made vessels that they needed for daily use such as dough bowls.

Collections made by Stevenson and Cushing in 1879 and by Stevenson in 1880 were scarce in jars and bowls but consisted primarily of effigy vessels and figurines. Batkin, 1987:111

Condition: this Historic Cochiti Pueblo Very Large and Deep Pottery Dough Bowl is in very good condition with evidence of pueblo use

Provenance: from the collection of a gentleman from Santa Fe