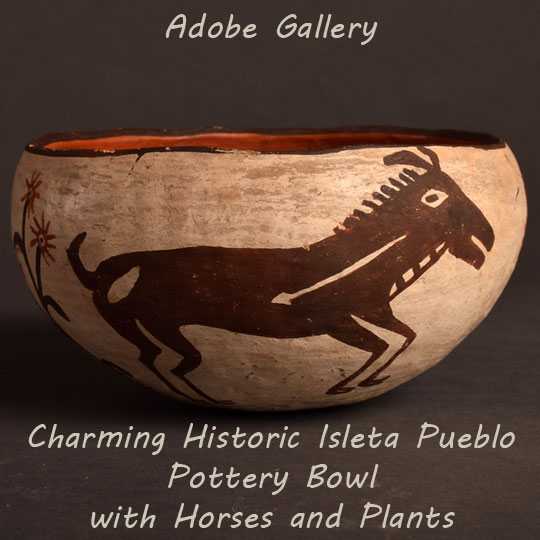 This historic Isleta Pueblo small pottery serving bowl is decorated with two wonderful horse figures and two flowering plants.  The base coat of white slip covers the entire exterior surface, including the underside. A dark brown horse dominates one side of the bowl and a dark orange horse dominates the other side.  Between the two horses is a flowering plant resembling sunflowers.  The rim is painted dark brown and the interior is covered in red slip.  The bowl appears to be from the 1920s and is in remarkable condition.

On first examination, I thought this bowl was from Isleta Pueblo because of the appearance but also thought it could have been made at Acoma Pueblo.  Examination of the clay at a few spots on the underside of the vessel reveals a tan-colored clay so that basically rules out Acoma as the source.  It looks so much like something an Isleta potter would have made and taken to the Alvarado Hotel in Albuquerque to sell to tourists arriving on the AT&SF daily train.

The original theory accepted by the Western World was that there were no horses in the Americas prior to Columbus' arrival in 1492 and the Spanish settlers soon after that. The Western World concluded that all horses of Native American peoples were, therefore, descendants of horses brought from overseas.  This is no longer true.  There is now evidence that the horse was in North American long before Columbus. So, it is now appropriate to say that they were reintroduced when he arrived. In 1493, on Columbus' second voyage to the Americas, Spanish horses, representing E. caballus, were brought back to North America, first in the Virgin Islands, and, in 1519, they were reintroduced on the North American continent.

The first fossils of one of the ancestors (Eohippus) of the modern horse was found here in New Mexico area!  During the Ice Age, they became extinct here in North America.  You have to watch the YouTube video presented here on this page for more information on this amazing discovery.

Provenance: this Charming Historic Isleta Pueblo Pottery Bowl with Horses and Plants is from the estate of a resident of Pennsylvania

Recommended Reading:  Pueblo Pottery of the New Mexico Indians: Ever Constant, Ever Changing by Betty Toulouse