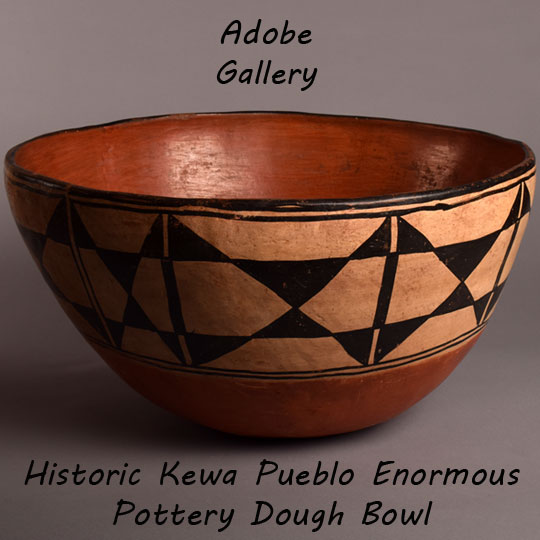 This rare in size pottery dough bowl dates to the turn of the last century and features a very traditional Santo Domingo Pueblo design composed of black triangles arranged in the form of stars.  The design is framed at the top and bottom with paired framing lines with a ceremonial line break at the rim and through the design panel.  The design covers the upper half of the vessel wall.  The lower half is polished red slip.   The interior of the bowl is highly polished red slip.  This is one of the largest historic pottery dough bowls from Santo Domingo Pueblo (now known as Kewa) I recall seeing, in person or in print. I cannot imagine how many loaves of oven bread could be made in this at one time.  Enormous is very descriptive of the visual impact of this bowl.

We tend to think of all vessel shapes of pueblo pottery as being traditional to the pueblos for a thousand years, but dough bowls are different in that they did not exist before the arrival of the Spanish because the bread source for the pueblos then was corn and it was prepared on a heated stone.  After the Spanish arrived and introduced flour, pueblo women were intrigued but still it took over a hundred years for them to accept flour and use it for bread.

Pottery dough bowls did not appear as functional items until the mid- to late-1700s. It took that long for the pueblos to accept white flour introduced by the Spaniards who had arrived just before 1600. The puebloen women were accustomed to utilizing abundant and familiar corn meal and not white flour. The ubiquitous outdoor horno (oven) seen at every household only appeared after the pueblos accepted using white flour. The horno is what they began using for baking this new type of bread from oats, barley, rye and even wheat instead of corn meal which might have been fried or prepared in other ways.

Condition: The bowl was broken and then put back together by a professional restoration artist.  The repairs are undetectable to the eye.

Provenance: this Historic Kewa Pueblo Enormous Pottery Dough Bowl is from a member of the Balcomb family, owners of Native American art galleries in the mid-1900s.

Reference:  Batkin, Jonathan. Pottery of the Pueblos of New Mexico 1700-1940.  The Taylor Museum of the Colorado Springs Fine Arts Center, 1987.