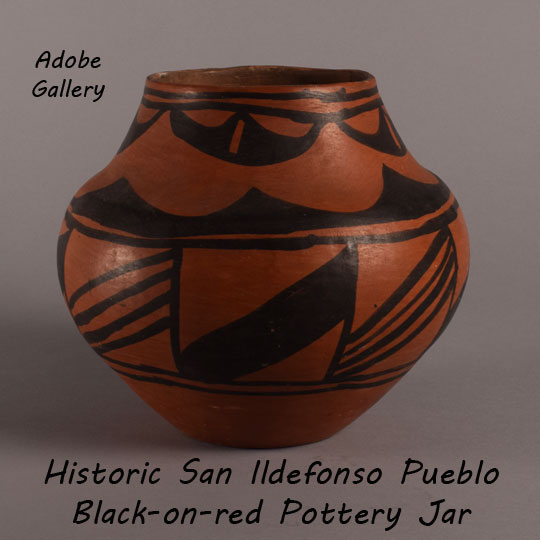 This San Ildefonso Pueblo historic pottery jar by an unidentified potter was first slipped from top to bottom with red clay, then a design in black pigment was applied on the red. She painted an arrangement of parallel lines and black bars alternate around the body of the jar. Above that, is a continuous black wave-like element. Suspended from a framing line near the rim are black cloud elements. The rim is red. The jar dates to circa 1900.

According to Jonathan Batkin, "Almost all leading potters made Black-on-red, including Martina and Florentino Montoya, and Maria and Julian Martinez, but one family excelled in its production. Dominguita Pino was famous for making and painting this type, and her husband, Santiago Martinez, probably assisted her in decorating. Documented ceramics attest that her son, Crescencio Martinez, and son-in-law, Alfredo Montoya, painted her pottery. Her daughter, Tonita (Roybal) also specialized in Black-on-red. Tonita's early work was painted by her and her first husband, Alfredo. Later pieces, painted by her second husband, Juan Cruz Roybal, are among the finest made." [Batkin, 1987:46]

Although we do not know which potter made this jar, the age of the jar would place it to the time when Dominguita Pino was active.

Condition: there is a vertical crack from the rim to the shoulder, and some abrasions to the red slip on the rim top.

Provenance: this Historic San Ildefonso Pueblo Black-on-red Pottery Jar, circa 1900 was sold to a client in 2000 from whom we now have it back to sell again.