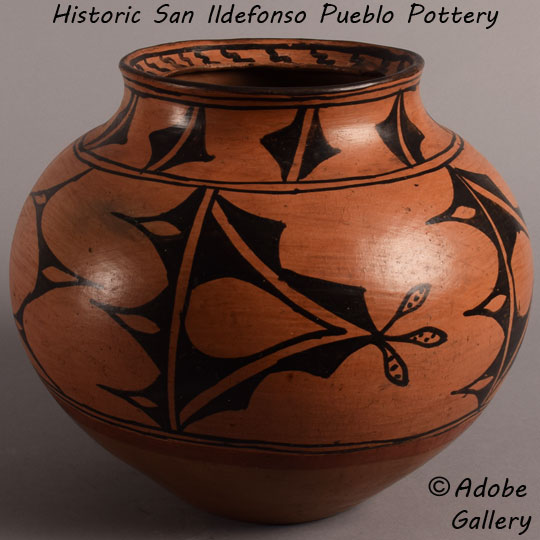 This pottery OLLA or water jar was most likely made sometime around 1900. At one time in the past, it had a pottery lid as evidenced by an inner rim on which a lid would have rested. The lid is no longer with the jar. The three floral elements with black dots, on the main body design, are like a San Ildefonso Pueblo black-on-red jar in the Denver Art Museum which Maria Martinez identified as having been made by Marianita Roybal and painted by Maximiliana Martinez, c.1890-1900. They could be the artists who made this jar. Maximiliana, or Anna, was a sister of Maria Martinez. [Batkin, 1991:60]

To quote Jonathan Batkin "Marianita was well known to Maria Martinez. Maria told Kenneth Chapman in 1947 that her sister Maximiliana (Anna) and Anna's first husband, Crescencio Martinez, ‘used to paint a lot of Marianita's pottery.'" [ibid] We have no way of knowing the maker of the jar and the one who painted it, but we can speculate based on design elements of documented pieces.

San Ildefonso pottery retained its traditional Tewa shape in the late 19th and early 20th centuries more so than the other Tewa pueblos, due primarily to its more isolated location than the others, according to Jonathan Batkin. There were so few potters at the pueblo at that time that tradition remained strong.

According to Francis Harlow, Black-on-red pottery at San Ildefonso was an innovation that started after 1880. Red slip had been used on Tewa pottery since the middle of the seventeenth century but rarely decorated with black painted designs.

It is believed that Tesuque Pueblo developed the idea of black-painted designs on red slip as early as 1830 and it is likely that most of the Tewa Black-on-red jars originated at Tesuque. It is known, however, that San Ildefonso also produced them.

The first potter identified as specializing in Black-on-red pottery at San Ildefonso is Dominguita Pino (1860-1948), whose daughter, Tonita Roybal (1892-1945), carried on her mother's legacy. It is known that Martina Vigil (1856-1916) and her husband Florentino Montoya (1858-1918) also made San Ildefonso Black-on-red pottery. According to Batkin, who conducted a thorough survey of turn-of-the-century census records, there were only 8 potters at San Ildefonso Pueblo listed as such by the census taker.

Provenance: this Historic San Ildefonso Pueblo Black-on-red OLLA without Lid is from a gentleman from New Mexico HARMONY BY HAND Art of the Southwest Indians—Basketry, Weaving, Pottery [SOLD]
by