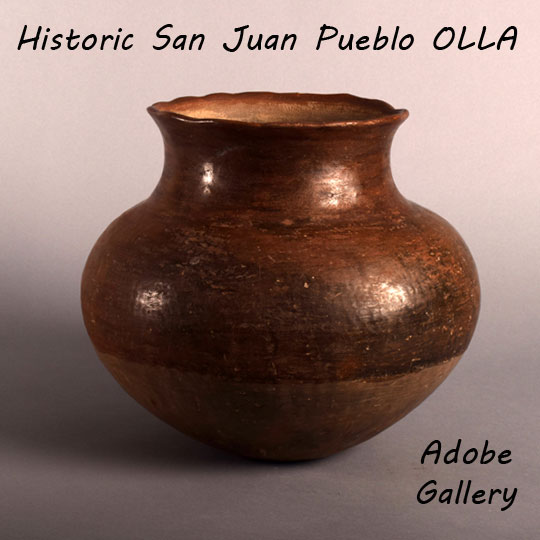 This San Juan OLLA was most likely made between 1900 and 1920.  Collectors with an appreciation for the simple, understated beauty of San Juan traditional pottery will recognize this as a unique piece.  Its tone falls somewhere in between the typical red and black options, most likely because of a firing process that neither deprived the pot of oxygen nor left it fully exposed to the elements.  A pueblo potter informed us that the jar’s fluted rim signifies rain clouds, and the slightly indented band around the shoulder signifies the water reaching the earth.

The jar’s color might best be described as an earthy, muted plum tone.  It’s rich and beautiful, shifting from almost red in certain areas to black in others.  Horizontal waves of black add depth to the neck, which curves up and out to a slightly fluted rim.  The lower section, appropriately, falls somewhere in between the typical tan and gray tones.  Strong fire clouds appear around the base, occasionally making their way up to the jar’s midsection.  The jar has a slight tilt which is visible from certain viewing angles, but it seems to suit the jar nicely, just as the unusual coloration does.  This is a unique and beautiful example of historic San Juan pottery.

Note: San Juan de los Caballeros, as it was christened by the Spaniards, or San Juan Pueblo has become Ohkay Owingeh (pronounced O-keh o-WEENG-eh) which translates to “Place of the Strong People.”  San Juan Pueblo is no more. The pueblo's tribal council restored the community's traditional name in September 2005. Former New Mexico Governor Bill Richardson instructed all state agencies to refer to the pueblo by its new name. The new name is the traditional name for the village, used before the Spanish arrived 400 years ago. Their Feast day is June 23-24th honoring their patron St. John the Baptist.

Condition: excellent condition—light wear from use and handling, but no restoration or repair

Provenance: from the estate of deceased New York City attorney Henry Christensen III, who purchased this from us in 1988.