ART OF CLAY Timeless Pottery of the Southwest [SOLD] 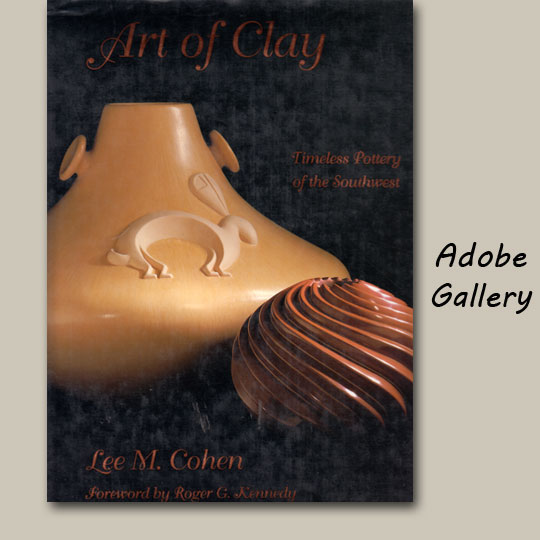 ART OF CLAY Timeless Pottery of the Southwest

The magnificent ceramics shown in this book leave us in no doubt that we are seeing one-of-a-kind art not merely pretty ethnic artifacts.  Major southwestern artists whose works are avidly sought by museums and knowledgeable collectors the world over are represented with full-color photographs and informative commentary. Most of the works shown are reproduced here for the first time in book form.

Every significant change that has occurred in two thousand years of southwestern American ceramic art has been led by a relatively few gifted individuals. Names are lost in history until early in this century, after which we are able to recognize famed potters like Nampeyo, Maria and Julian Martinez, Margaret Tafoya, and others who, in their time, caused major deflections in the mainstream of ceramic art. This exquisitely beautiful book presents the remarkable individuals whose works are even now causing another great change as history repeats itself.

Lee Cohen's Introduction examines the evolution of this art form and spotlights the contributions of genius—of the rare creative spirits who have spearheaded radical change over the centuries in southwestern ceramics. He shows timeless examples of Mimbres, Sikyatki, and other prehistoric pottery whose sophistication and creative power remain remarkable by any standards.

The ninety-six beautiful full-color photographs of museum-quality works accompany a well-researched and informative text. Together they present a thrilling experience. Art of Clay provides an exciting guide which will surprise and delight both the curious and seasoned collectors alike. It helps the reader identify significant developments in this dynamic and rapidly changing art form.