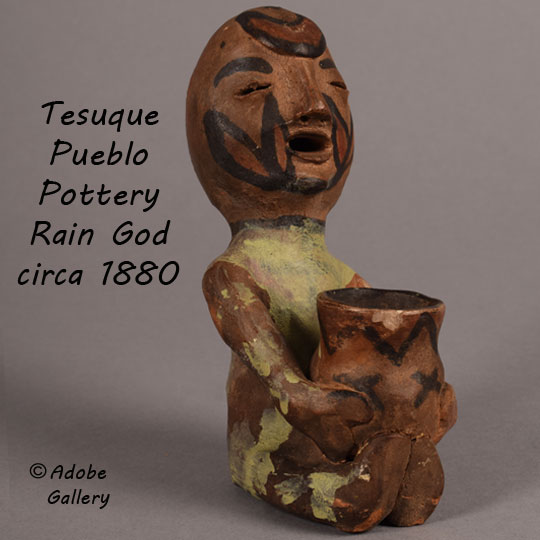 This early Tesuque Pueblo Rain God figurine likely dates to the late 1800s. This date would place it on the early end of the period during which Tesuque Rain Gods were produced. Tesuque potters began making Rain Gods around 1880, as tourism expanded in Santa Fe and visitors sought interesting and easily transportable souvenirs. Enterprising traders marketed Rain Gods as sacred artifacts with spiritual significance, but the figurines had no ceremonial or religious purpose. They were made specifically for sale to tourists.

Rain Gods, particularly those made during the late 1800s, remain highly collectible today, as do a variety of other forms made for the market by inventive Tesuque artists. Tesuque was the only Pueblo to make these unique figurines. This figurine displays a beautiful dark brown tone, which is augmented with painted designs in black, red, and a unique light green color. A half-moon appears on the figure's forehead, with a small star nestled in its interior. Painted designs appear on the Rain God's pot as well. This is an appealing example of a widely appreciated pottery style.

Some of the important curio dealers in and around Santa Fe in the late 1800s and early 1900s were Jake Gold, Abe Gold, J. S. Candelario, and Francis E. Lester. Research by Kathleen Howard and Diana Pardue in preparation for publishing Inventing the Southwest, revealed an order from Candelario's shop ". . .a baggage car with about 200 assorted small pieces of pottery, which we can sell at retail from 15 cents to 25 cents'' (September 1904) and "one hundred Tesuque pottery gods, small size, and fifty of the larger size black gods" (April 1905). The following year, the Fred Harvey Company ordered "100 small rain gods, three dozen larger ones." Anderson p.70

Condition: The figure appears to have been broken and skillfully glued back together at some point. Cracks appear around the arms, left foot, and the area in which the pot connects with the figure.  This is expected with a figurine that is over 140 years old.

Provenance: this Historic Tesuque Pueblo Rain God Figurine, circa 1880, is from a private collection When Rain Gods Reigned: From Curios to Art at Tesuque Pueblo [SOLD]
by Duane Anderson