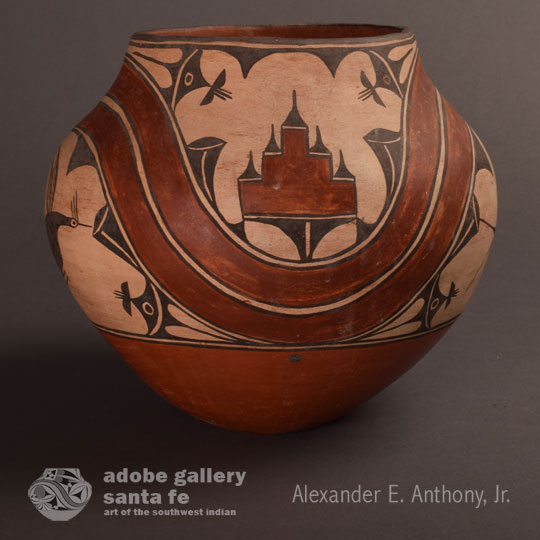 The pottery jar, or Tinaja, is typically thick-walled as is the custom at Zia Pueblo.  The cream slip that serves as the background for the design was rag polished to a smooth finish.  The double rainbows are outlined in black and the birds and associated designs are painted in black.  There is a black rim, a single black framing line at the rim and double framing lines near the base. Each framing line features a ceremonial break.

It is always speculative to make an attribution to a specific potter but using examples collected and documented with date of collection and potter from whom collected give some credence to making a comparison.

This jar has two specific items of design that are clearly very similar to a jar in the collection of the Museum of Indian Arts and Culture, Santa Fe, which is acknowledged as the work of Ascenciona Shije Herrera Galvan (1905-1953). [Harlow and Lanmon, 2003:268].  In a photograph dated ca. 1940, she is holding a jar with a black bird almost identical to this one, with wide V-shape tail feathers and wings filled with parallel lines.

In another photograph of a jar by her dated to ca.1920-1930, there is a very similar stack of capped feathers as shown on this jar.  The discrepancy is in the pair of double rainbow arches. Those shown in the published photograph are different from those on this jar.  Perhaps two out of three similarities are sufficient to make an attribution.