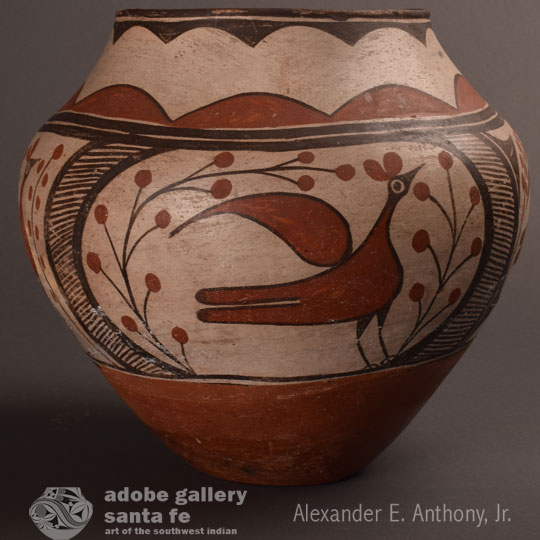 Occasionally a potter will innovate on traditional designs, straying not too far from tradition but enough to satisfy her artistic desires.  That is clearly evident in this Zia Pueblo pottery jar.

Each of the birds is orange, outlined in brown lines, with a brown face and legs.  Each has a large flowing wing and split tail feathers. They each perch on the lower framing line.

The neck design is simple and elegant, not detracting from the magnificence of the birds and berries.  There is an undulating cream color band that it topped by arched black clouds and a series of orange clouds below.  Wide double framing lines separate the neck design from that of the body. Both have a ceremonial line breaks. There is a pair of double framing lines below the body which does not have ceremonial line breaks.  Below these is an unusually wide wiped-on red band measuring about 1-½ inches.

It appears that the jar dates to the turn of the last century.  There is no potter’s signature attached.

Condition:  this HIstoric Zia Pueblo Polychrome Pottery Jar with Birds and Berries is in very good condition with some scratches and abrasion