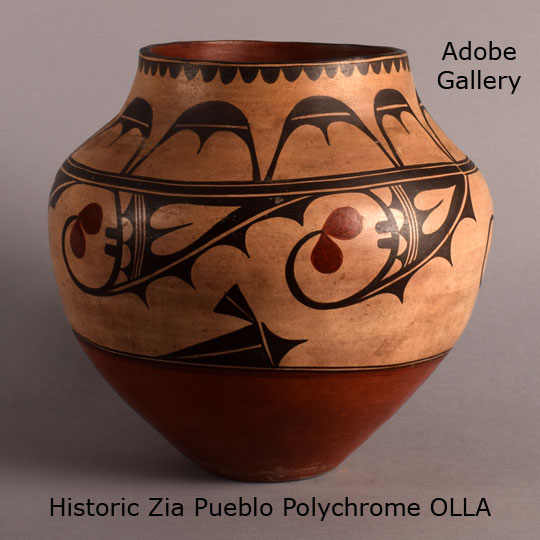 This is an excellent example of an early twentieth century pottery water jar from Zia Pueblo, created most probably in the 1910-1920 period. It is traditional in that it is coil formed from native clay with the addition of crushed basaltic lava for temper.

The concave base and underbody are stone-polished bare paste with a narrow red band at the top of the undecorated area, and a hand-wiped red band on the interior of the rim. The design area is divided into two sections—the neck and the body. The neck design features a continuous band of rain clouds pendant from the rim, below which are a series of stylized clouds. The main body designs are graceful curving volutes as extensions of cloud elements.  The pendants at the ends of the volutes are a deep red color—the only red in the exquisite design.

Condition: The vessel's integrity is excellent. There has been some minor repainting near the rim, confined to one area. UV examination reveals that there has been no breakage or repair, only overpaint in one area.

Provenance: this Historic Zia Pueblo Polychrome OLLA with Volutes is from the estate of a previous client of ours who had impeccable taste and purchased accordingly.

- The Pottery of Zia Pueblo by Harlow and Lanmon