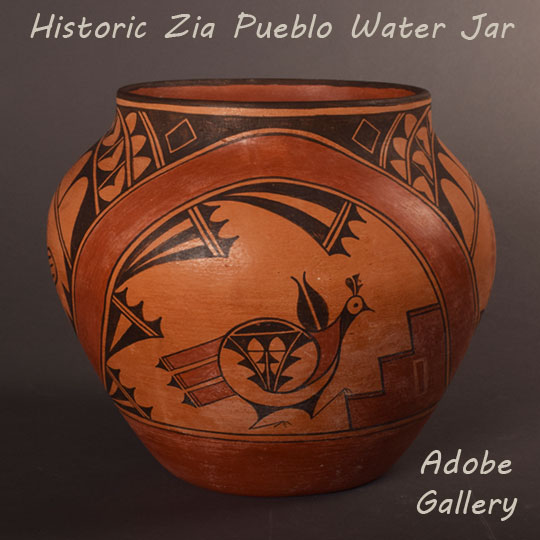 Zia Pueblo potters adopted a new slip around 1920 and began using it as the base slip over which the design was to be painted.  The slip color is a strong orange-tan and is easily distinguishable from the previous cream slip with which most vessels were treated.  It appears that the orange-tan slip continued in use concurrently with the use of the cream slip.

It is not evident that the orange-tan slip was used before 1920, based on documented collections of pottery before that date.  None of the collections gathered at Zia before 1910 has an example of an orange-tan slip vessel. The fact that this jar does not appear to have a wiped-on red band at the underbody confirms that it was probably made after the mid-1930s as that is when the use of the red band was abandoned.  That would, in essence, make it quite likely that this jar was made after 1935.

The rainbow arch had its beginnings in the 1880s and evolved and developed over the next four decades.  An undulating single rainbow arch, as seen in this jar, seems to be prominent beginning around the 1920s and has continued to today.  Below the rainbow arch is a series of rain clouds which might easily help identify the maker if only one documented example could be located.  Above the upper rainbow arch are black squares, outlined in orange and enclosed in a black background.

Pictorial designs appear under and above the rainbow. A very elaborate Zia bird is protected under the arched rainbow on opposite sides of the jar.  The bird is more detailed than normally seen on Zia jars. Its body is filled with an elaborate upside down triangular element. The birds legs are skinny and one foot is resting on the stepped elements to the right as if the bird were in the process of climbing the steps.

The area under the design panel is covered with stone-polished red slip that continues to the underside concave base.

There seem to be many clues on this jar that would help in identifying the potter but a documented and authenticated example must be located some day that contains one or more of these unique design elements.  The orange-tan slip adds a softness to the appearance of the jar, making it a pleasing visual delight. The extra design elements associated with the Zia birds add a special appeal to the design. The jar is well above average in appearance.

Provenance: from a member of a New Mexico pueblo who accepted it in trade from another member of the pueblo.