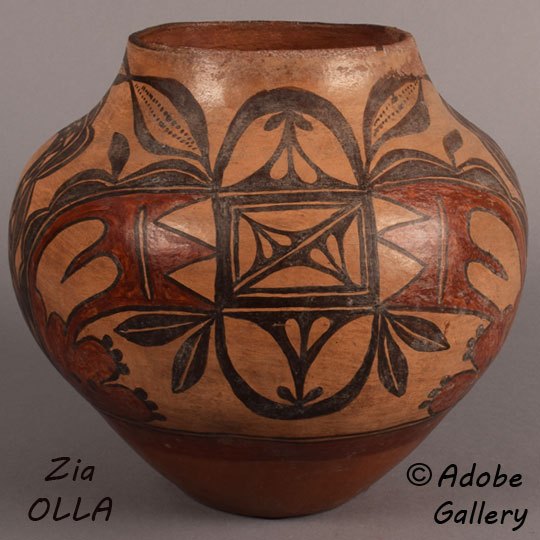 This historic Zia Pueblo OLLA most likely dates to the late 1800s or early 1900s. It's a gorgeous polychrome piece with a somewhat muted palette of black and red over a tan slip. The slip's coloration has a hint of orange to it, but it's a soft orange, and it serves as a perfect backdrop for the intricate designs that cover the jar's exterior.

A red base with a darkened band near the top covers about one third of the jar's exterior. The remainder displays two repetitions of a wonderful design, which is actually influenced by historic Acoma Pueblo pottery. A jar with an incredibly similar design is pictured on page 97 of Lanmon and Harlow's The Pottery of Zia Pueblo. They say, "An interesting influence from Acoma pottery is seen in the dotted filling of the split leaves. Indeed, (Rick) Dillingham, who studied Acoma Pottery extensively, noted for this jar that the whole field of decoration exhibits ‘Acoma Design' of the period ‘1875-1890.'"

The unidentified Zia Pueblo potter who created this piece did a fine job with her Acoma-influenced designs and the vessel itself. It's interesting to see a work in which an artist reinterprets existing imagery in such a vivid, expressive manner. The vessel's shape is elegant and beautiful, and the patina is appealing. Light wear from use is visible, particularly around one side of the rim, but no structural damage is evident. This is an excellent historic Zia Pueblo pottery example.

Condition: excellent condition with wear from use but no chips, cracks, or repairs

Provenance: this Historic Zia Pueblo OLLA with Acoma-Influenced Designs is from a private Colorado collection