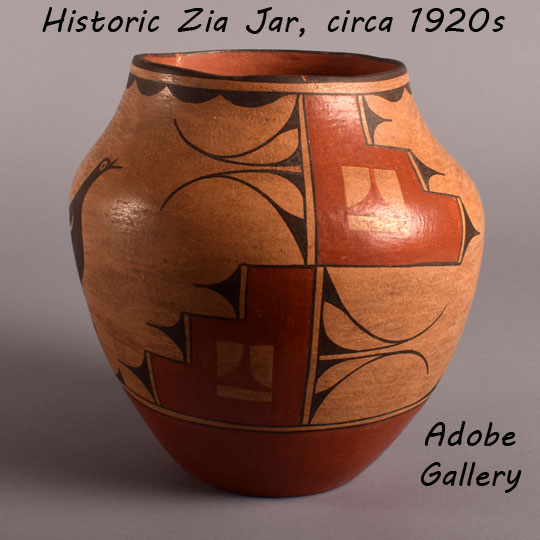 This circa 1920s jar from Zia Pueblo defies its age due its lack of traditional historic Zia Pueblo pottery designs covering most of the vessel surface.  The potter chose to highlight her design with a Zia bird that is unique.  I was unable to find a similar one in the Harlow and Lanmon book on Zia pottery.  The bird has its wings tucked to its body rather that spread open over its back as most potters present.  Also, the even and squared off tail feathers and the clacking beak are unique and not illustrated in published sources.

Her choice of the other design is a pair of capped feathers, one facing right and the other facing left.  The triangle, without black outlining, represents the eye of a bird.  The lack of outlining here is indicative of early twentieth century pottery from Zia.  The black pair of curved elements represent leaves.

The open and uncluttered design and the minimalist bird should be clues to identifying the potter, but I could find no published examples that were like this one, so she will remain unknown.

The red slip on the underbody and on the capped feathers was stone polished, but that on the inner rim was left in a matte state.

Here we have a decidedly modern approach to a Zia jar that is otherwise traditional in all aspects of manufacture.  The potter beautifully displayed her love of minimal design and open space.  She achieved a remarkable result.  This is an extraordinary work of art.

Condition: this Historic Zia Pueblo Pottery Jar with Birds and Capped Feathers, circa 1920s is in excellent condition.