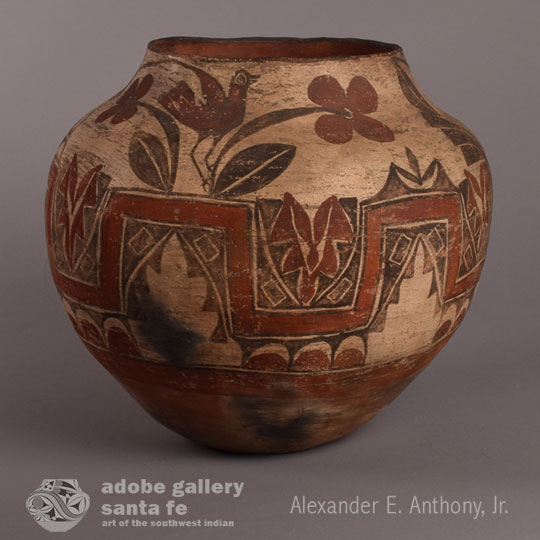 Also, according to Harlow and Lanmon, realistic birds, as seen on the neck of this jar, appeared about 1820.  It is believed that birds of the style on this jar with associated floral elements were encouraged by Santa Fe merchants starting in the mid-1800s and blossoming into the late 1800s Trios Polychrome period.  Traders had been buying pottery from the pueblos since the 1850s but the real increase occurred with the arrival of the transcontinental train in 1880 which brought tourists and collectors into the area, and, of course, increased production of pottery by the potters.

We feel safe in saying that this jar is a Trios Polychrome from the mid-1800s with design elements related to San Pablo Polychrome of the early 1800s.

Condition:  UV examination reveals no repairs or restoration other than one hairline crack at the rim that has been stabilized. Painted design abrasions.

Provenance: this Historic Zia Pueblo Trios Polychrome Pottery OLLA, circa 1850s is from the estate of the client to whom we sold this in 2013. AMERICAN INDIAN POTTERY – an identification and value guide [SOLD]
by