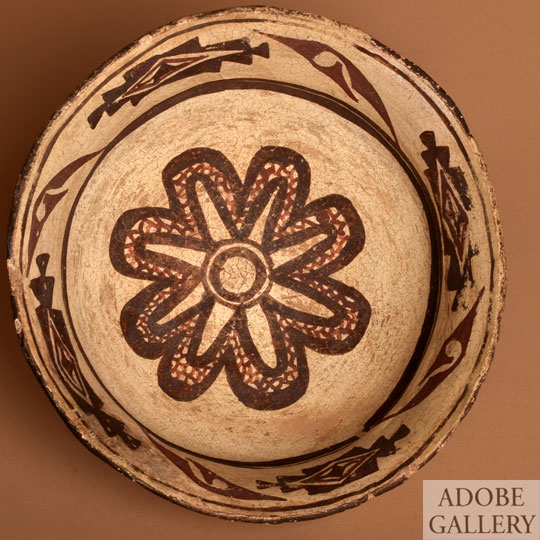 This spectacular Zuni Pueblo pottery serving bowl is very similar to one collected by Alexander Stevenson in 1887 for the Smithsonian which has been dated to circa 1870.  Both bowls easily could have been made by the same potter as the design in the bottom of each of them is very much the same. An enormous number of vessels dating between 1850 and 1885 were collected by Stevenson at Zuni which provide good references for dating Zuni pottery.

Another attribute that contributes to dating this bowl is the exterior red bottom.  Red underbodies began to give way to black as early as 1850 but totally gave way to the black by 1895, with most of the change occurring between 1860 and 1880.

The shape of the bowl is hemispheric up to the point where the rim juncture joins the lower bowl.  At that point, the rim evidences an extra roll of clay that is visible on the interior of the bowl, then the rim flares outward is a wide (two inch) flare.  Rims of this style date to the 1870s.

The design on the interior bottom of the bowl is floral in style, executed in wide brown lines enclosing red lines.  From the large variety of rim designs on Zuni bowls of the period, it appears that there was no set pattern but potters chose what they desired.  The red diamond pattern surrounded by dark brown triangles is exactly like one on a bowl illustrated in Harlow and Lanmon, figure 16.44. The red design on the rim is similar to one dated 1870 in figure 16.38 of the same reference.  Two wide framing lines separate the lower bowl from the rim. Both framing lines have a ceremonial line break.

The design on the exterior is a single band that encompases the bowl body and rim.  That design, referred to as feather caps is more often seen on bowls of this period.  Perhaps that was a more traditional and specified design for bowl exteriors.

This is a very rare and exceptionally attractive bowl from a time period from which there are few examples available.  It is a pleasure to have access to this historic treasure.

Condition:  the Historic Zuni Pueblo Small Pottery Serving Bowl, c.1870, is structurally in excellent condition.  There was a V-shape chip on the rim which has now been inserted back in place.  It is easy to spot the repair as it is darker than the surrounding areas of the rim.  A blow-out on the exterior of the body, which probably occurred during the firing process, is visible as it has not been corrected because it does not interfere with the structural integrity of the bowl.

Provenance: from a client from Pennsylvania