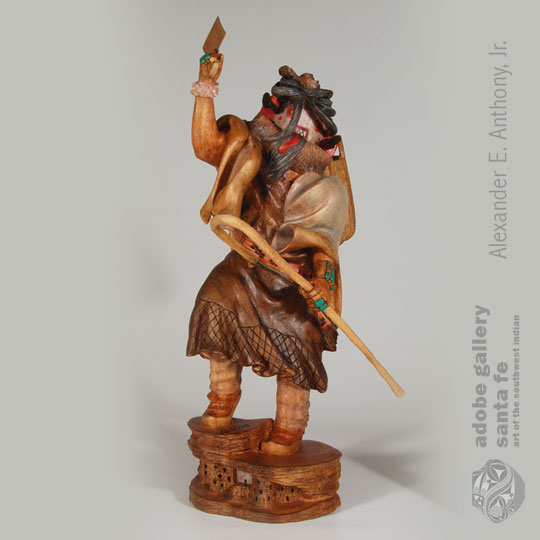 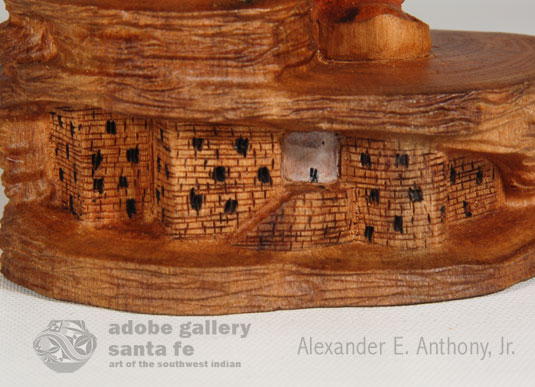 Kevin Pochoema has only the restrictions of the shape and size of the cottonwood root when he sets out to carve an all-wood katsina doll.  In his mind he visualizes what that particular root can accommodate. He studies the wood and plans how to fit the doll he has in mind into the shape of the root.  If an arm of the doll is going to stick out from the body, what orientation does it have to be to stay within the boundary of the wood. He has a rule that the katsina, excluding some attachments, must be a single-piece carving, so the whole doll must fit within the boundary of the root.  Kevin has mastered the techniques of fitting a doll of his thoughts into the available wood.

The katsina chosen by Pochoema for this carving was Horo Mana or Cold Bringing Woman.  She is a katsina from the Tewa Villages of First Mesa, sometimes called the Yohozoro Wuhti and she appears during the Powamu ceremonies.  She carries a comb in one hand, to muss up people’s hair when she appears with Nuvak’china, her grandson.  She appears in all white. As her name implies, she brings the whiteness of winter.

Powamu occurs with the arrival of the false spring of February when the world is readied for the new season of growth.  Out of the kivas pour throngs of katsinas, great and small, protected in their activities by guards and warriors and followed as they walk through the villages by a froth of clowns.  During this period the children are initiated into the Katsina Cult and readied for their growing season just as the land will be.

One is immediately drawn to the hair of the doll which drapes over her face and is a maze of complicated swirls behind her head.  Pochoema said each grouping of hair is from the original wood, none being added or glued in place. It appears nearly impossible to carve such a maze of tangles, but he did it.

The next most amazing accomplishments are the swirls in the cape draped over her shoulders.  The slightest miscalculation with the knife would have broken off the ends of the swirls, but he succeeded in that not happening.

The face of the katsina and the cape over her shoulders are white, following the tradition of this katsina.  The white was applied as a stain over the natural color of the wood, realizing a mellow white to blend in with the browns of the remainder of the carving.

The additions to the main carving are the basket on her back, the staff in her left hand, the comb in her right hand, and the feathers in her ears.  All the remainder of the carving is original to the root. The carving was completed in March 2018.

Other highlights to mention are the folds in the manta under her raised arm and the flow of the embroidered hem of the manta.  The basket was carved in a style to represent a true basket with rods and weft clearly defined. A cliff dwelling village is carved into the pedestal.

There is nothing to criticize about this carving.  It is about as fine a katsina doll as one could produce.  Kevin Pochoema is one of the master katsina doll carvers of today. 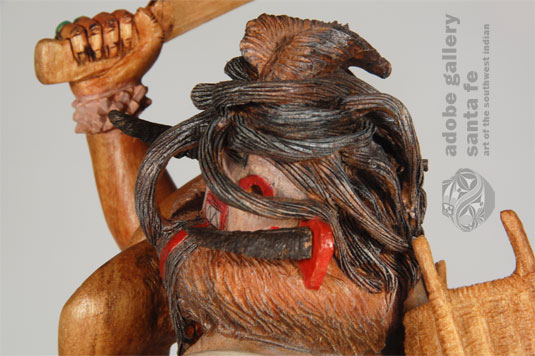