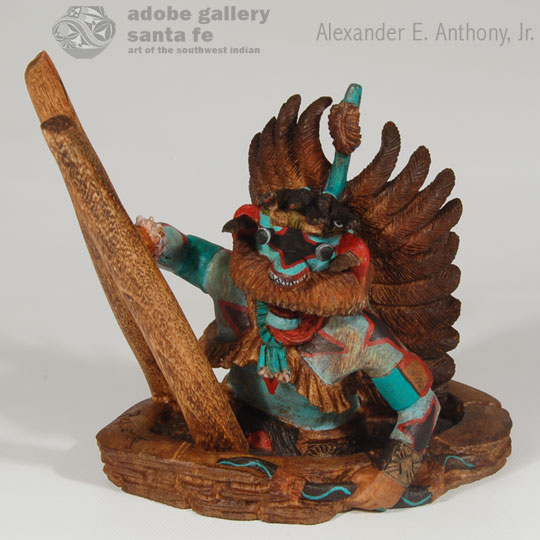 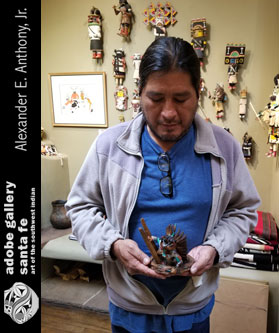 According to published information by Barton Wright, "A'hote may appear in any of the directional colors, but the two most common are the yellow A'hote (Sikyahote) or the blue A'hote (Sakwahote). In a Plaza Dance it is not unusual to see a line of Sakwahote with several Sikyahote, and a white or red form as well." A'hote may appear in Mixed Katsina Dances or the Palölökong Dances as well as Plaza Dances.

This carving represents the blue A’hote, or Sakwahote Katsina.  A’hote is an excellent hunter. The A’hote Katsina dress appears to be influenced from Plains Indian culture, particularly the buckskin skirt and full feather headdress.  The suspected influence of the Plains Indians is not documented.

This A’hote has a large black star on its face, chest, and both arms; protruding eyes, and a long snout.  In addition to the long flowing feather headdress on his back, there is a group of feathers spread across his head and two feathers protruding from his ears.  The artist has placed A’hote emerging from the kiva.  He is heading to the plaza to participate in a dance.

Kevin Pochoema, born in 1965, is of the Greasewood Clan and is from the Hopi village of Bacavi on Third Mesa.  He is a top prizewinning carver, receiving prestigious awards from the O'odham Tash, Gallup Inter-tribal Indian Ceremonial, Museum of Northern Arizona, and many other venues.  His attention to detail, proper body proportions, flow of clothing, and preciseness of painting have been recognized by judges at such prestigious venues.

The carving is basically a one-piece work of art.  Feathers on his head, the protruding feathers on the back, feathers in his ears, protruding eyes and one ladder pole are added items.  All others are part of the original wood.

Kevin’s attention to detail is expressed in the fine care he spent on each feather of the flowing headdress, which is on the back of the doll where one would not normally see.  It is such attention that puts him above many other carvers.    This is another masterpiece from Pochoema.