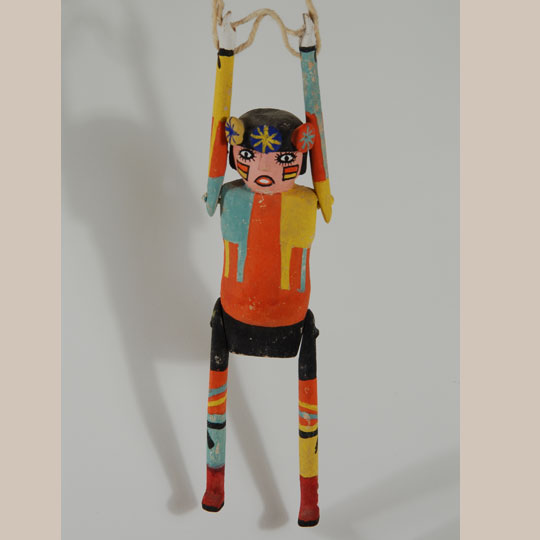 “The Powamu is one of the most important of the Hopi ceremonies.  It occurs in February of each year in most of the Hopi villages. In actuality it is not a single ceremony but a cluster of several important events that are interwoven.  Most years the ceremony is presented in an abbreviated form. However, in the years when the tribal initiation of the young men is held, the Pachavu Ceremony will be attached to the Powamu, and the ceremony is presented in its full, unabridged form.

“Undoubtedly, the most important aspect of the Powamu ceremony is the anticipation of the coming growing season, with ritual designed to promote fertility and germination.  To accomplish this the Powamu chief appears as Muyingwa, the principal deity of germination, and every male who has been initiated into the Kachina cult is expected to grow beans in the kivas.  The growing of these bean sprouts gives the ceremony its popular name, and offers omens for the success of the coming growing season.

“Second in importance is the initiation of the children into the Kachina Society at this time. Powamu officers serve as fathers of the kachinas at this time reinforcing the relationship between the Powamu and Kachina cult.  In addition to these rites there is a strong educational aspect that appears throughout the entire ceremony.

“When the young men of the village are initiated into the various fraternities at the Wuwuchim, an event referred to as the tribal initiation, changes take place in most of the other ceremonies.  In the Powamu Ceremony it is the addition of an extra day at the end of the regular ritual. Many of the kachinas that are present in the Powamu also appear or may be seen in a different guise at this time.

“The Powamu kachinas are always portrayed with a mask, whether they appear in the plaza or in the form of paintings or dolls. However, the most common appearance of the actual dancer is without a mask for the simple reason that the Powamu Kachinas are the first to show the newly initiated youngsters that they are just people portraying the spirits.   When portrayed as a kachina doll or as a painting of a kachina, it is always shown masked because it is not proper that the uninitiated see kachinas, particularly such important ones, without masks.” Wright 1973

This doll, representing the Powamu Kachina, was made in puppet form.  Legs and arms are movable and, if knowledgeable enough to operate it, it can be made to perform as a puppet.  These puppet katsina dolls are believed to have been made only by two Hopi carvers—Henry Seeni and Jimmy Koots—both having done so in the 1950s-60s.  The style of this one is that of Henry Seeni. It is not known why the two Hopi carvers did not continue making the puppet dolls or why other carvers did not make them.  It seems that the puppets were only made for about a decade. This particular puppet is published in Hopi Katsina 1,600 Artist Biographies, page 276.

Provenance: this Hopi Pueblo Bean Dance - Powamuy'taqa Puppet Katsina from the collection of a family from Oregon