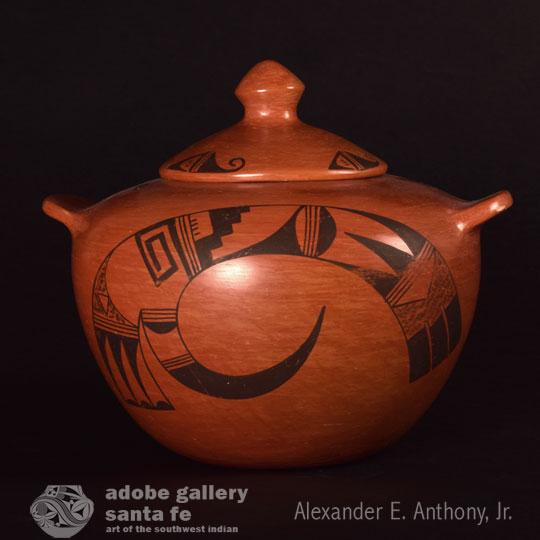 This award winning pottery jar was not signed by the Hopi Pueblo potter but it was purchased by the current owner at the Museum of Northern Arizona annual Hopi Show on July 2, 1964.  All items at that annual show have a tag with the potter’s name and any other specifics, however, the owner does not have the tag but does had a receipt from the museum with the potter’s name, so there is no question that it was made by Emogene Lomakema in 1964.

Emogene Lomakema (1901-1999*) was a resident of the village of Walpi, at the far tip of First Mesa on the Hopi Reservation. She has been extensively collected by the Museum of Northern Arizona, Flagstaff. She had a long and successful life and was a favorite of collectors. She was not active later in her life so there is very little of her pottery seen on the market today.

The temptation is to refer to this as a cookie jar but it is not necessarily meant to be used for that. It is a Hopi lidded jar and will be referred to as such.  The black pigment design is a simple stylized Sikyatki-type bird.  There is one on each side of the jar.

Condition: structurally in excellent condition with an intact lid.  There are minor surface abrasions.

Provenance: this Hopi Pueblo Black on Red Lidded Pottery Jar by Emogene Lomakema is from the estate of a family from Santa Fe.  This jar won FIRST PLACE at the Museum of Northern Arizona in Flagstaff in 1964.  The Ribbon and Original Sales Ticket ($22 in 1964) accompany this jar.

*Birth and death dates from the website of The Church of Jesus Christ of Latter Day Saints. The Hopi Survival Kit: The Prophecies, Instructions and Warnings Revealed by the Last Elders (SOLD)
by Thomas Mails