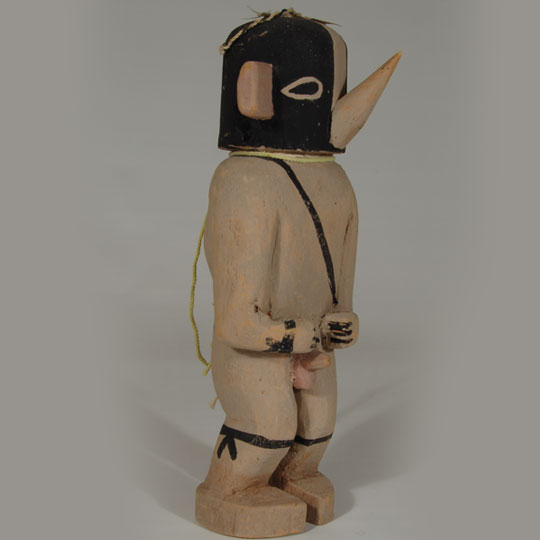 Undoubtedly Kokopelli, the Hump-backed Flute Player, has caught the imagination of more people than any other Hopi kachina.  Some of that interest is because he is so blatantly phallic in nature, but beyond this he appears in every nook and cranny of the Southwest.  His image is found in all the pueblos and among the southern Indians as well.  He dances happily around a Hohokam pot and chases mountain sheep through the canyons of the San Juan.  There is always speculation about what inspired this personation.  Ties with Mexico and even South America have been suggested for he appears in these places.

“Among the Hopis he is a Flute Player only when he borrows a flute to dance.  Usually he appears in the Mixed Kachina Dances or sometimes in a Night Dance.  Despite these relatively minor appearances, he is thought of as a seducer of girls, a bringer of babies, a tutelary of hunting, and an excellent subject for the carving of tihus or kachina dolls.” Wright, 1973

Jimmie Kootshongsie is best known by everyone as Jimmie Koots.  He was born at Hopi Pueblo on the Third Mesa village of Hotevilla during the period of World War I.  At a very young age, he and many other Hopi children were removed from their homes and taken to government schools where they were to be stripped of their Hopi beliefs and heritage and assimilated into the White man's culture.  Koots survived the five long years at the Bureau of Indian Affairs School and then returned to his native village.

At age 22, Koots was again taken away from his native village and sent off to the Pacific to fight in World War II.  Following this war, he once again returned to the village of Hotevilla.  It was then that he discovered that the big oil companies and the government were colluding to remove the Hopi from their reservation because of the wealth of mineral resources—coal, gas, oil and Uranium.  He became an activist against strip mining and the big corporations.  Because of his and many other's efforts the Hopi retained their native land.

Jimmy Koots was among a group of Hopi who revived the ancient art of traditional Hopi Katsina carvings.  He was immensely popular in the 1960s and 1970s as a katsina doll carver.  His dolls were mostly sold in Santa Fe at a downtown shop called Rare Things by Dutton, a business that is now closed but was very active in the 1960s-1980s.  His carvings, although not signed, are so distinctive in appearance that they can be easily identified as his work.

This carving, as usual, is not signed with the name of the carver but it is without question the work of Jimmy Koots and was probably carved in the 1960s.