As the procession of the Bean Dance proceeds around the village there are usually two or three of these clowns in the vanguard somewhere.  They are noisy, boisterous teases.  One minute they will have organized a Plains Contest Dance that knocks the other katsinas about while the next moment they will have a foot race underway that will go right through the middle of a group of katsinas.  They will tease the guards or lure the Kwikwilyaka into mocking one of the Angry Katsinas.

Wherever they are, the uproar is continuous, and they are the last to give up and go into the kiva.  Time and again the Guardian Katsinas must return to a plaza to make sure the Hó-e keep up with the procession as they get carried away with their fun.  It is possible to follow their progress by watching the heads of the Hopi youngsters which point to them like a compass to the north pole.

The Hó-e will present a doll of himself to one of the children.  It will be a small doll of the size of this one.  It is quite likely that this doll was a present to a child from a Hó-e during a past Bean Dance.

There is no English name for this clown.  His humorous behavior is that of an irresponsible but lovable clown who accompanies the reserved Chief Katsinas as well as the fierce guards and Warrior Katsinas.

This Katsina doll dates to the early 1940s.  His arms are tucked to his torso and the lower arms jut out slightly.  The white pigment appears to be kaolin, a mineral pigment often used as a primer coat before applying the color pigments.  The flowers on his forehead were made from layers of paper.  The back of the head was first covered in a small piece of wool, to which a small group of feathers was tied.

Condition: very good condition with some paint chipping, loss of wool and feathers, and a repair to the left foot.

Provenance: this Hopi Hó-e Katsina Doll in Small Size is from the personal collection of a gentleman from Santa Fe 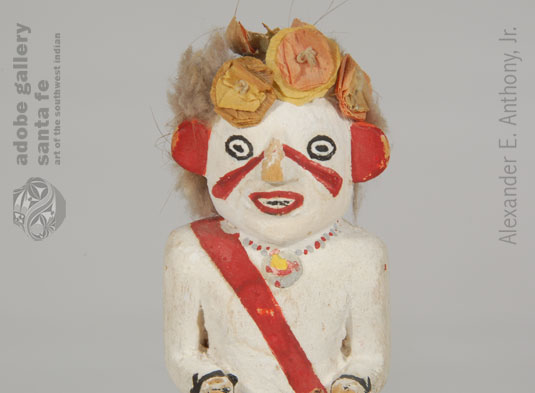