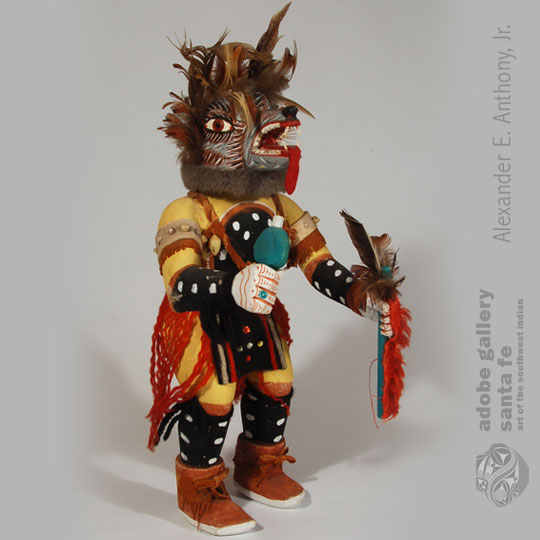 In the early 1970s, there started a trend among Hopi katsina doll carvers of carving the entire piece from wood—using not other materials such as feathers and fabrics. Prior to that, carvers embellished their katsina dolls with real bird feathers, shell, fabric and other materials—an attempt to portray the dolls in the same clothing and adornments as the Katsina dancers wore when dancing in the plaza.  The crackdown by the United States Fish & Wildlife Department against using feathers of migratory birds on dolls that were for sale was the reason. Most dealers—who were the buyers from the carvers—were unsure whether feathers were from migratory birds or not, so they began to refuse to purchase dolls from the carvers if there were feathers.

Interestingly, the federal law against the use of feathers on items for sale did not apply to fly fishing flies or fishing lures.  One wonders why Congressmen would discriminate against the Native arts and not against the U.S. fishing industry.  Someone suggested that there were more fishermen in Congress than there were collectors of Native American arts.

This example of a Wolf Katsina doll was beautifully carved with accurate body proportion, good stance, and an excellent mask.  He wears a loincloth made of felt and decorated with yarn and sequins. His skirt is strings of twisted red yarn. A leather bandolier crosses his chest and back and it is adorned with small sea shells.  His moccasins are carved and were embellished with leather lacing. In the left hand is a stick embellished with yarn and feathers and in his right hand is a gourd rattle. A beautiful array of feathers adorns the face mask.

Attached to the doll is a tag bearing the paper label of the Fred Harvey Company which states, “From the Hopi Villages” and a price of $55.

Condition: this Hopi Kweo - Wolf Katsina Doll, circa 1950 is in very good condition with minor paint abrasion and loss of some fabric.

Provenance: From the estate of Santa Fe dealer and collector Martha (Marti) Struever, who passed away in August 2017 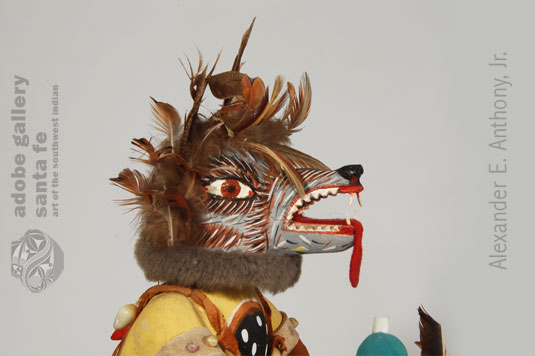