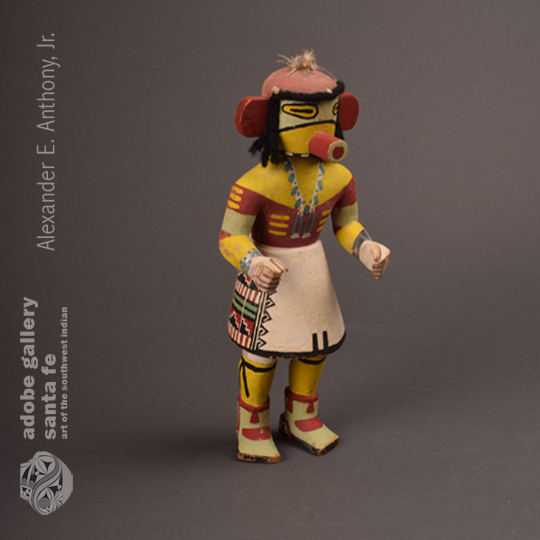 There are several variants of Corn Katsinas who are designated as Rugan Katsinas (Rasping Katsinas).  This carving appears to be one of those variants. They are accompanied by Manas who use gourd scapulae and rasps as musical instruments to accompany the katsinas during their dance.  They appear in a regular dance during the spring to promote the growth of corn. They are probably the most popular of all the katsinas and because of this popularity, they can appear in the Kiva Dances, Plaza Dances, and Mixed Dances.  Other Corn Katsinas are Avachhoya (Spotted Corn), Ka’e, Sio Avachhoya, Sotungtaka and others.

Provenance: purchased on the Hopi Reservation by a gentleman in the 1960s.  It appears to have been made for a Hopi child who would hang it from a rafter as it will not stand unaided. Dolls made to sell to tourists are made to stand properly. This one must be hung.