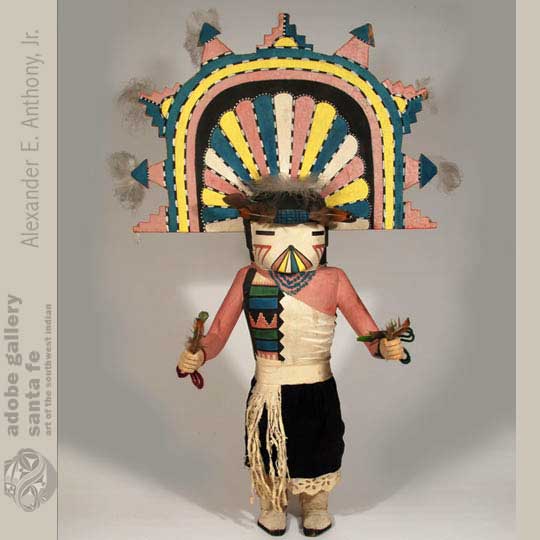 According to Barton Wright “He (Poli) seems to appear solely on Third Mesa and may actually be a development of that Mesa.  His partner (Poli Mana) looks almost exactly like the Palhik Mana but does not serve quite the same function. The female katsina partner is portrayed by a man unlike the regular Palhik Mana who is a woman.  The steps and postures of the Poli Katsina and Mana, in fact the entire form of the dance, are very much like that of the more common social Butterfly Dance.” Wright, 1973

Barton Wright further states that the katsina is a continuum, beginning with the Poli Mana at one end and finishing with the Hopi Salako Mana at the other. Somewhere in between lies the Palhik Mana. This hypothetical continuum relates only to appearance.

As Poli Mana, she is the dancing companion to the Poli Katsina of Third Mesa and is personated by a man.  As Salako Mana she is either the partner of the towering Salako Taka or the female who grinds corn during the Puppet Dances in the kivas.  When Palhik Mana dances, she does so in quite a different manner than does the Poli Mana, and on First and Second Mesas, she is portrayed by women.  When portrayed by women, she is not masked and then is not considered a katsina. On Third Mesa she is masked, is a katsina and is portrayed by men.

Now that we have the distinction between the three versions in our head, let’s discuss this Poli Mana Katsina doll.  On the underside, it is noted “H. Yestewa Oraibi 1937.” It is a cottonwood carving with a combination of painting and clothing.  The bodice portion of the manta is carved and painted. From the waist down is covered in fabric—a velveteen black skirt with white lace at the hem and a white rain sash around the waist that hangs down on the right side.  It is a large doll, measuring 20 inches to the top of the head and just over 29 inches to the top of the tableta.

I have not found any published information on a carver named H. Yestewa, but for a 1937 carving, it is in remarkable condition.  It is obvious that H. Yestewa was an accomplished carver of katsina dolls as this one attests.

Provenance: this Hopi Poli Mana Katsina Doll from 1937 is from the estate of Santa Fe art dealer and collector Martha (Marti) Struever. 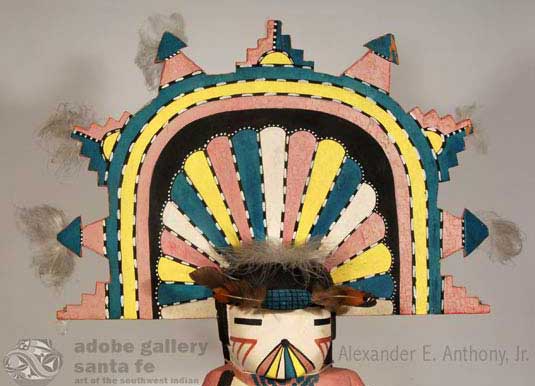