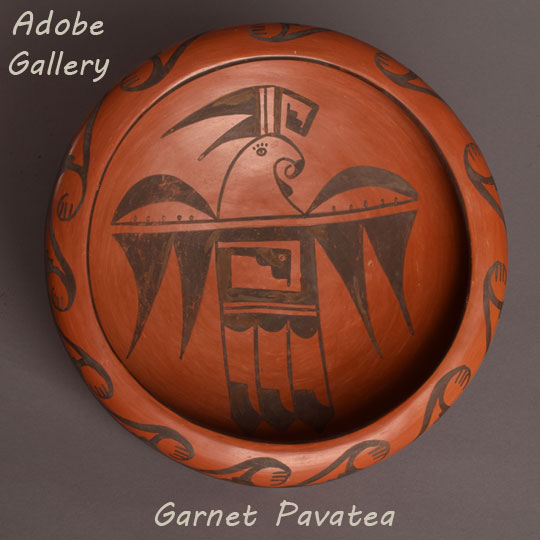 This shallow bowl made by Garnet Pavatea, a Hopi-Tewa potter of First Mesa’s Hano Village on the Hopi reservation in Arizona, is unique.  The potter drilled a pair of holes on opposite sides of the bowl that are practically hidden under the curve of the rim, from which one could hang it on the wall. The holes are currently strung with string by which to hang it.

The bowl was made from yellow clay (sikyatska) found on the reservation within easy access at Hano village.  When fired, the yellow clay turns a brick-red color.  Pottery made from this yellow clay is being made less often now as the clay has become less abundant.  Garnet Pavatea was a fan of this yellow clay.

The yellow clay “may be observed as one begins the final ascent to the First Mesa villages from the Gap.  On the right, restricting access to tunnels and excavated caves in the cliff, is a stone barrier that seals off a dangerous area where collapses in the walls have resulted in fatalities. Mining clay has always been a hazardous occupation for the potter.  The mother of Garnet Pavatea lost her life as the result of a cave-in.” Blair & Blair 1999:126

The shape of the bowl is like many others except for the exaggerated curvature of the rim.  Possibly, Garnet did this to conceal the drilled holes she planned to provide for hanging. The curvature of the rim provided her an area to display a fine design of a wave-like continuous chain around the bowl.  On the interior she filled the area with a single Sikyatki-style eagle executed in black pigment. The bowl is signed with the name of the potter.

Hopi artisans owe much to Mary-Russell Ferrell Colton, co-founder of the Museum of Northern Arizona in Flagstaff.  She was instrumental in creating the Hopi Craftsman Exhibition in the early 1930s with the intent of fostering production of quality work.  She was concerned that traders were content to accept and sell mediocre work from Hopi craftsmen and were not interested in educating the public on quality crafts.  She organized the craft exhibit for the July 4th weekend every year and it has served her intent to greatly increase interest in quality Hopi crafts.

Garnet Pavatea was a long-time entrant in the craft exhibit and won many awards by doing so.  She also seemed to be a favorite of the Museum of Northern Arizona. She was often a demonstrator at the Craftsman Exhibition.  For many years, Adobe Gallery had a standing order from the Museum of Northern Arizona for any Garnet Pavatea pottery available.

Garnet was born in 1915 and passed away in 1981.  Late in her life she suffered medical problems but continued making pottery until her death.  She had a long and productive career and left a legacy of wonderful pottery for others to enjoy.

Provenance: this Hopi Black-on-red Shallow Pottery Bowl with Wall Hanging Capability by Garnet Pavatea is from the extensive collection of a resident of Santa Fe