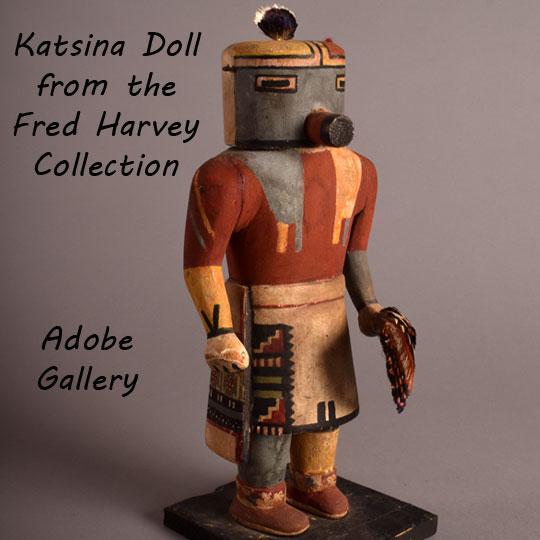 This katsina doll carving appears to be a legitimate Hopi carving but does not represent a known Hopi katsina.  It was perhaps made and painted to look authentic but with markings that are not accurate.  Some older katsina doll carvers deliberately made changes to dolls they were making for sale so that they would not be compromising their religious beliefs by releasing to non-Hopi buyers a true ceremonial katsina doll.  This is known to have been the case with some of the older men who had strong Hopi beliefs.

The carving was executed beautifully as was the painting, however, there are no identifying traits to associate with a known katsina.  He is mounted on a square black wood platform of the style used by the Fred Harvey Company on many of its katsina dolls.  There are no other identifying markings to indicate a Fred Harvey provenance, however the doll is part of the collection with that provenance.

The feather fan in the left hand is unusual on a Hopi carving and was perhaps added for interest.  The feather on the top of the head is similarly unusual.  Both of these could and should be removed. Hopi Kachina Dolls and their carvers [SOLD]
by Theda Bassman