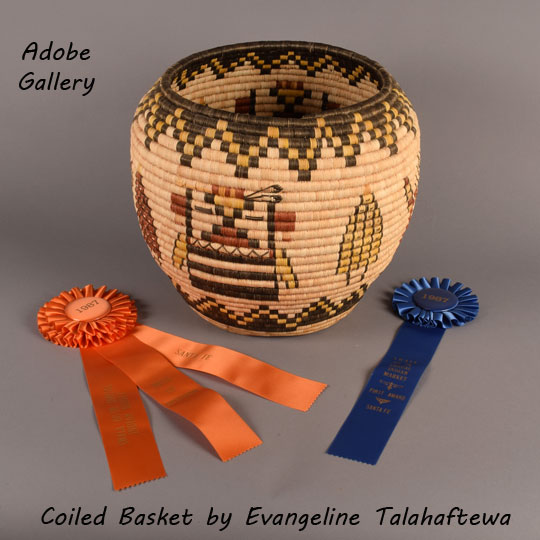 Women have been weaving baskets at Hopi for generations. Originally used for ceremonial purposes, basket weavers found a market for their work with tourists wanting to buy reminders of their travels to Indian Country. There are two distinct basket styles from Hopi.  Women from Second Mesa weave coiled baskets, made of galleta grass and yucca.  Women from Third Mesa weave wicker plaques and baskets.

This amazing coiled basket was made by Evangeline Talahaftewa of Second Mesa. It was the winner of multiple awards at Santa Fe Indian Market in 1987.  It is easy to see why this basket was a prize winner.  Evangeline wove colorful images of corn along with kachina figures on the sides of a deep basket. The basket is tightly woven, the mark of an expert weaver. It won both the First Award Blue Ribbon and Best of Show Orange Ribbon at Indian Market.

Evangeline Talahaftewa was born in 1912 on Hopi’s Second Mesa.  As a young girl, she learned to weave from her grandmother. She became known as one of the most proficient basket weavers from Hopi’s Second Mesa.  She was invited to demonstrate at the Smithsonian in Washington, DC and won the American Indian Living Treasure Award in 1991.

Condition: the basket is in excellent condition.

Provenance: this Hopi Second Mesa Deep Coiled Basket by Evangeline Talahaftewa is from the estate of a family from New Mexico