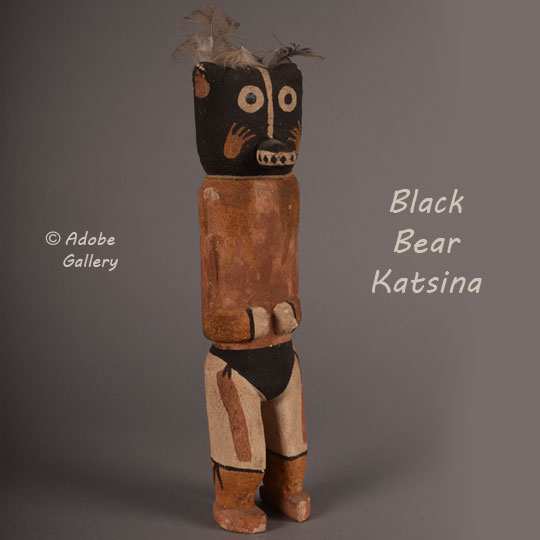 This katsina doll is that of a Black Bear Katsina, known by the Hopi as Hon Katsina. He was carved from cottonwood root, and painted in colors of black, brown, and white. The paint texture reflects a mixture of sand. The doll is in the form of dolls from the 1930s, but it is likely to be of a later date.

This katsina is of such great strength that he can cure the sick. He appears in the Soyal Ceremony at First Mesa as the watchman or side dancer for the Chakwaina. He also may appear in the Palölökong Dance singly or in a group, as well as in the Mixed Katsina Dance, dancing outside the lines. His most distinctive feature is the presence of a bear footprint on either cheek. [Wright, 1973:114]

"The animals are the advisors, doctors, and assistants of the Hopi. It is through the assistance of the animals that the Hopi have overcome monsters and cured strange diseases. In fact, the greatest doctor of them all is the Badger for it is he who knows all the roots and herbs and how to administer them. . . All animals, however, share one attribute which is that they can remove their skins at will and hang them up like clothes. When they do they appear exactly as men, sitting about in their kivas, smoking and discussing serious matters. They are the Hopi's closest neighbors and are always willing to assist if approached in a proper manner and asked for help. When prayer feathers and meal are not given they often withdraw until proper behavior is forthcoming. The Animal Kachinas thus represent the relationship present between the Hopi and the kachina spirits which some may compare to true friendship on the human level. It involves an exchange of special favors in their interaction, accompanied by an exchange of respectful gestures. [Wright 1977:98]

Provenance: this Hopi Hon Katsina, Black Bear Kachina Doll is from the collection of a client from the East Coast